Promise of Blood by Brian McClellan 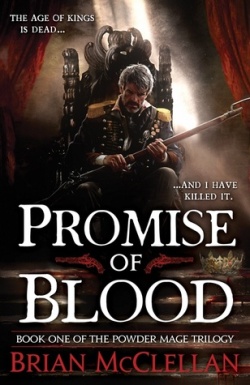 Former police inspector and current private investigator Adamat is summoned to the Skyline Palace to help resolve a baffling mystery: during a brutal coup against Adro’s monarchy, every single member of the Royal Cabal uttered the same cryptic phrase right before dying: “You can’t break Kresimir’s Promise.” Field Marshal Tamas, who coordinated the coup with a small group of other powerbrokers, needs Adamat’s perfect memory and investigative skills to figure out what this may mean.

Adamat conducts his investigation while Tamas begins the brutal work of purging the country’s nobility and pacifying the capital during the inevitable civil war. His first priority is hunting down an uncommonly powerful member of the Royal Cabal who managed to escape the palace during the coup. Tamas assigns this duty to his son Taniel, a talented powder mage who has just recently returned to the city with a mysterious young savage named Ka-Poel. Gradually it becomes clear that the overthrow of the monarchy was just the start of a series of events that will change the world forever….

The most obvious parallel between Promise of Blood and, say, the Mistborn novels by Brandon Sanderson is its magic system, or, more accurately, one of its magic systems. The concept of the “powder mage” combines the ideas of flintlock fantasy with the basics of Sanderson’s allomancy: not only does this world have both guns and magic, but powder mages can consume gunpowder to heighten their senses and give them additional powers. This allows them to do things like see a faraway target, float a bullet for miles, or even change a bullet’s direction.

Just like the metals in allomancy, gunpowder becomes a consumable ingredient that gives its users an edge, but it also adds weaknesses that can be exploited, e.g. one powder mage can cause someone else’s supply of gunpowder to explode, often with catastrophic results. In an interesting twist, gunpowder is also highly addictive: at least one character in the novel is on the verge of needing a Twelve Step Program.

By itself, this concept would merely feel like Sanderson Lite, but McClellan places it in a context that makes it somewhat more interesting: the Royal Cabal, which traditionally has supported the monarchy, uses a different, more traditional type of magic that involves manipulating the “Else” to control the elements. This has created tension throughout history and right up to the start of the novel. This fantasy world is in flux, going through a change similar to the advent of gunpowder in our own history. McClellan then adds political and economic factors to the mix, with a variety of factions interested in tipping the balance of power. There’s still a degree of simplicity to this fantasy world that doesn’t entirely thrill me, but dismissing it as just “allomancy with gunpowder” would be unfair.

In terms of structure and pace, Promise of Blood is uneven. After the initial coup and subsequent civil war, the novel takes off in a different direction. At that point, it feels like the story stops, reboots, and then lurches off again, but despite the heightened stakes it often lacks the tension of the initial section. The perspective changes frequently: coup leader Tamas, his son Taniel, investigator Adamat, a young laundress. Some of the threads feel unnecessarily drawn out, while others are rushed. Some sections simply lack any kind of tension. Promise of Blood frequently feels a bit directionless.

McClellan’s prose is basic and straightforward, perfectly functional but rarely interesting or surprising. The only exceptions to this are a few clumsy sentences like “The Kez had executed Tamas’s late wife” or “The fight was fast, violent,” things that maybe should have been fixed in editing. Aside from blips like those, Promise of Blood is a competently written fantasy story, especially for a debut. That’s definitely promising for Brian McClellan’s future.

Less promising: when Adamat is sending his family to safety, he thinks: “Damned woman. What he’d give for an obedient wife.” When Tamas is dealing with the aftermath of the coup, part of his battle plan includes this: “Then my soldiers will funnel them towards the Samalian district, where they can loot the nobility’s houses and rape their daughters[…]” Taniel’s former fiancée Vlora (she cheated on him) is one of the only female powder mages in the novel, but spends most of the novel silently off-camera. I expect this may change in the next book in the trilogy. Still: strong, positive female characters are few and far between in Promise of Blood.

Despite the novel’s flaws, I’m fairly sure that Promise of Blood will find its audience. It combines some of the grittiness found in the works of Joe Abercrombie with the type of structured magical system that Sanderson does so well. Brian McClellan doesn’t have the chops of either of those two authors yet, but you can sense that he has the potential to get there. I’m not entirely sure yet whether I’m interested in reading further into this trilogy, but I wouldn’t be surprised if many readers feel differently and make this a highly successful debut.

This review was originally published at Tor.com on April 8th, 2013.

This entry was posted in Fantasy, Reviews and tagged Brian McClellan, Orbit. Bookmark the permalink.