Posted on September 3, 2014 by Stefan (Far Beyond Reality) 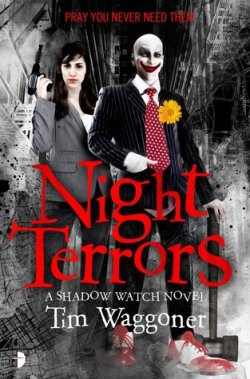 Tim Waggoner’s new novel Night Terrors introduces Audra and Jinx, together maybe the oddest buddy cop duo I’ve ever seen. For one, they’re both agents of the Shadow Watch, a, well, shadowy supernatural organization tasked with patrolling the border between our world and the Nod, the realm of dreams and (most notably) nightmares.

Audra is a human agent who works for the Shadow Watch. Jinx is not human: actually, he’s an Incubus dreamed up by Audra. You see, Audra used to have terrifying nightmares about a scary clown sitting at the foot of her bed. Then those nightmares became real, in the form of Jinx: an insanely cheerful ultra-violent clown complete with huge flip-floppy shoes, make-up, and a flower in his lapel. (The flower can be used to spit acid at his enemies.)

As Night Terrors gets started, Audra and Jinx are in Chicago, hunting down the rogue Incubus known as Quietus, who is not supposed to be in Chicago or, well, anywhere in the real world. Then an Incursion—leakage between the Dream Realm and our world—takes place, turning the famous bean-shaped sculpture Cloud Gate into a lumbering, many-limbed monster that starts to destroy everything within sight. (It’s promptly nicknamed Beanzilla.)

And so begins a crazed adventure that takes place across both our reality and the land of Nod, featuring many bizarre dream creatures and violent altercations that will ultimately, yes, determine the fate of both worlds…

The set-up for Night Terrors intrigued me sufficiently to give it a try, but unfortunately I got annoyed by one of its flaws quite early on: Tim Waggoner has a habit of explaining, in great detail, how the various magics and supernatural elements of his fantasy universe work, often interrupting dialogues or actions scenes to do so:

Negators prevent Incubi from accessing Maelstrom energy, thereby nullifying their abilities and rendering them, if not exactly powerless, no more of a thread than an average human being.

Incursions are times when the dimensional barrier between Earth and the Maelstrom grows thin, allowing M-energy to leak through and wreak havoc with reality.

Waggoner needs to use these info-dumps to have the early action scenes in the novel make any sense, but it does occasionally make the start of the novel feel like a cross between a regular story and a game manual. It’s hard to get into a novel when it front-loads the exposition so heavily.

Once most of the info-dumping is out of the way, the novel takes off and continues at a hectic pace, packed with confrontations between Audra/Jinx and various Incubi. Jinx himself (itself?) contributes much to this manic atmosphere, with his tendency to go crazy and hyper-violent at the drop of a hat:

He let forth a battle cry that sounded like a cross between a dyspeptic Viking heading into battle and a deranged lion that had overdosed on PCP. He ran toward Beanzilla, sledgehammer at the ready.

The three quotations I’ve included in this review actually should give you a good idea of whether this novel’s something you’d like. If you’re in the mood for a hectic story about an unlikely buddy cop duo, featuring someone who’d be a great candidate for becoming the (first?) non-human member of the Insane Clown Posse, and if you’re willing to forgive some frequent and untimely info-dumps, you might have a good time with Night Terrors. It’s full of gibbering-insane creatures from the depths of your nightmares, light on plot and heavy on action.

Night Terrors started off with an interesting concept (the Audra/Jinx partnership), but quickly lost my interest with its unevenly paced narrative. After a few more crazy combat scenes with an inhumanly shrieking clown and a menagerie of other surreal nightmares creatures, I felt like I’d seen enough. I finished the novel, but I doubt I’ll come back for Dream Stalkers, the forthcoming second novel in the Dream Watch series.