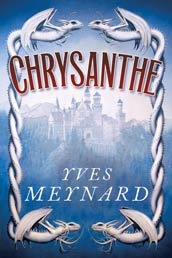 This week’s Fifty Page Fridays is also Far Beyond Reality’s first ever guest post, courtesy of one of the most consistently interesting SF&F bloggers around: Justin Landon of Staffer’s Musings. If you’re not reading Justin’s blog yet, you’re missing out on some of the most insightful and often funny reviews and articles in the SF&F blogosphere. This week, Justin took a fifty page sample of Chrysanthe by Yves Meynard.

Why I wasn’t planning to review it: Simply put, Chrysanthe is the story of a kidnapped princess who needs to be rescued by a dashing knight. If that’s not going to put off a mildly jaded book reviewer, I don’t know what will. I’ve also never heard of Yves Meynard, nor is he a debut author. That isn’t necessarily a black mark, but it does nothing to highlight the novel in my ever growing Mount Readmore. To be further superficial, the packaging of the novel feels very young adult. A picturesque castle, braided dragon tails, and the typeface all give me a Chronicles of Prydain (Alexander) feel. Unfair? Probably, but how else is the friendly neighborhood book reviewer to parse his reading?

My thoughts after fifty pages: Well, first off my major preconception was utterly incorrect. Chrysanthe is a not a young adult novel, or at least not one I’d let my daughter read. Rape and pedophilia are dominant topics in the early going as the novel’s protagonist is brainwashed into believing her father prostituted her at age three (not to mention taking his own turn). There’s also the use of one of those words that I’ve been trained as a man to never ever ever ever use to describe certain parts of the female anatomy.

Additionally, it’s unfortunate that after 55 pages, and completing ‘Book 1’, Yves Meynard hasn’t moved the story beyond a princess in distress who calls for her knight in shining armor (or this case red sports car) to be rescued from her overbearing uncle and psychotic therapist. Also falling into the ‘expected’ category, the world is structured around a multiverse concept that I’ve seen time and again. Magic Kingdom of Landover (Brooks), Chronicles of Thomas Convenant (Donaldson), Chronicles of Narnia (Lewis), and Planesrunner (McDonald) are just a few that come to mind. That said, it’s extremely well written with a strong narrative voice and a prose that feels like it should be written on weathered pages, long frayed from decades of handling.

The Verdict: If I’m basing my decision on whether to keep reading solely on the first 50 pages, I’d probably give the book away to the first person I run into who enjoys fantasy. Everything is expected and tired, with only Yves Meynard’s talent as a writer holding my interest. However, read the second half of the blurb:

“But reaching her true home brings Christine no solace, as her arrival spurs the enemies of the realm to desperate measures. The culmination of their plots plunges the land into a war filled with monsters, heroes, magicians, and epic confrontations that invite comparison to the greatest battles in all of fantasy literature.”

I haven’t gotten to any of that yet. Printed with narrow margins and what appears to be a 10pt font, Chrysanthe is far longer than its 496 pages would bely. Making a decision about this one with only 50 pages read would be a disservice to a talented author who may very well be using these tropes for a larger purpose. I’ll give it another 50 pages, but no promises beyond that.

Justin Landon is the editor/founder of Staffer’s Musings. You can find him on Twitter at @jdiddyesquire.