Emperor Mollusk Versus the Sinister Brain by A. Lee Martinez 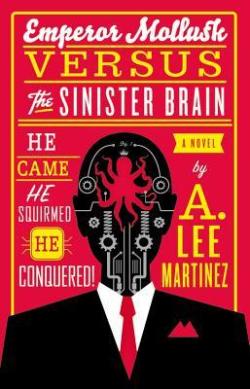 Emperor Mollusk’s interplanetary warlording days are mostly over. Sure, he’s still universally worshipped on Earth, the planet he subjugated in the past, although that may have something to do with the mind-control technology he developed too. Still, his days of planet-hopping and mercilessly crushing any opposition are mostly over. Nowadays, he considers himself mostly retired and focuses on his true love: exploring the boundaries of insanely dangerous science. This occasionally results in technology that would allow less discerning galactic despots to crush entire civilizations under their heels, but still: for all intents and purposes, Mollusk is settling down. Until he discovers that actual retirement is not that easy to achieve for a former Warlord of Terra…

I only discovered A. Lee Martinez recently with Chasing the Moon, a goofy and hilarious twist on H.P. Lovecraft by way of Bridget Jones (review). I enjoyed it so much that I resolved to check out more of the his work soon. Emperor Mollusk versus the Sinister Brain is the author’s latest novel and an equally goofy and hilarious take on pulp science fiction super-villains. You know that shadowy Emperor Zurg that Toy Story’s Buzz Lightyear is always going on about? Mollusk, the Neptunon invertebrate who subjugated the Earth, is cut from the same mold.

However, most of the novel focuses on the period in Mollusk’s life after he decides to take a break from the ruthless conquest of the galaxy and focus on technological research instead. He’s basically resting on his laurels, quietly working in his lab and only creating the occasional death ray device or endless source of energy, when suddenly his past catches up with him. Zala, the fearless Venusian warrior who is just about to arrest Mollusk for past transgressions against her planet, unwillingly ends up cast in the role of his bodyguard. After all, even though every single Venusian wants Mollusk dead and then some, they want to be the ones to bring him to justice, even if that includes keeping him alive until that day comes.

Zala and Mollusk end up meeting a variety of crazy cartoon super-villains and mad geniuses in a novel that reads like one long mad goose chase. The story is sprinkled with a handful of flashbacks that show Mollusk’s past and explain why he ended up retiring from the warlording game. This adds a little bit of depth to his character, but make no mistake: this is really not a novel you’ll want to read for the deep characterization.

Instead, what you get is A. Lee Martinez riffing on SF super-villains in his own inimitable style. The end result is a story that reads like a series of parodies of crazy video game boss battles, including corny dialogue and, because this is A. Lee Martinez, characters making fun of each other’s corny dialogue. There’s not much direction early on, making it feel more like a series of loosely connected episodes than a novel, but eventually all of it does come together in what’s possibly the craziest plot twist of all.

So, not much in the way of characterization or plot, but the jokes hit you in rapid succession and make Emperor Mollusk versus the Sinister Brain just enough fun to be worth your attention. The book is full of hilarious one liners, sly references, broad winks, slapstick humor, and general all-purpose gags themed around interplanetary villains. Here’s Mollusk, upon meeting a representative of a race he subjugated in the past:

“I could understand his frustration. We were both conquerors. The biggest difference between us was that I’d succeeded while he had failed. But history is written by the winners. Especially winners with access to global mind-control devices.”

Emperor Mollusk versus the Sinister Brain is full to the brim of jokes like this, but again, there isn’t a whole lot more to it. Having realistic expectations is the key, because your level of enjoyment will most definitely depend on how you approach the novel. Still, if you’re in the mood for a laugh, this is a fun, entertaining way to spend a few hours.

This entry was posted in Reviews, Science Fiction and tagged A. Lee Martinez, Orbit. Bookmark the permalink.

2 Responses to Emperor Mollusk Versus the Sinister Brain by A. Lee Martinez