The Killing Moon by N.K. Jemisin 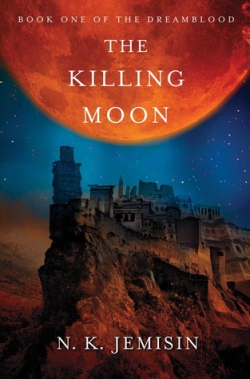 As is so often the case with great novels, the opening chapter of N.K. Jemisin’s The Killing Moon offers a snapshot of the conflicts and relationships that end up driving the whole story. We meet the Gatherer Ehiru as he stealthily travels through the city-state Gujaareh at night, collecting tithes of “dreamblood” for the goddess Hananja from its dying or corrupt inhabitants. This dreamblood will then be used by his order’s Sharers to heal and help others. Ehiru’s first commission is an old man who gladly and peacefully goes into his final dream, but the second one is a foreigner who doesn’t have the same outlook on Gujaareh’s religious practices — especially now they mean his own untimely death. He calls Ehiru a “Gualoh” or demon and then, mysteriously, tells Ehiru that he is being used…

The next chapters introduce the other two main characters in The Killing Moon. Nijiri is a young apprentice Gatherer who is on the verge of graduating and taking the place of another, recently departed Gatherer, and who has a complex relationship with his mentor, the aforementioned Ehiru. Sunandi is an ambassador/spy from Kisua, another city-state that has a long and complex history with Gujaareh. She plays a crucial role in this novel because she provides a look at Gujaareh and its religion and magic from the eyes of an outsider and a non-believer. Sunandi’s chapters reinforce the early impression that there is something rotten in in the city-state of Gujaareh, but exactly what that is doesn’t become clear until later on.

The Killing Moon is a novel that sneaks up on you. It starts off slowly and somewhat confusingly, lots of showing rather than telling, lots of new vocabulary to get used to. N.K. Jemisin has created a fascinating fantasy world here, one that mixes unique and surprising elements (such as Jungian psychology and Egyptian history) in a way I’ve simply never seen before, but she doesn’t just spell out all the world-building details you need to grasp its intricacies. Instead, this novel goes for full immersion in its world and its story from the very start. Narcomancy is described matter-of-factly, without much in the way of explanation. Likewise, the relationship between the city-states Gujaareh and Kisua is obviously complex and meaningful, but N.K. Jemisin doesn’t just spell out the details. Everything eventually becomes clear, but it’s also likely that you’ll have to file away some things as you read, trusting they’ll be explained later on. (If you’re impatient, there’s a glossary in the back.)

More importantly, the moral value of the characters’ actions is left to the reader to decide. The act of putting an ill, dying man out of his misery to collect his dreamblood is described as a simple mercy, but the next collection of dreamblood (in the very same chapter) is an involuntary one, from a victim who isn’t even Gujareen. The Gatherer carefully explains to him that everyone in the city is subject to Hananja’s Law, not just citizens and believers, but it quickly shows why Kisuati people like Sunandi have such aversion to narcomancy. It’s all described matter-of-factly, by characters who are firmly rooted in their own belief systems — which just happen to be diametrically opposed. As a result, the reader experiences these alien practices from both perspectives, and more importantly, gets a first-hand view of what happens when the characters’ moral high ground gradually becomes shakier and shakier.

The first dozen or so chapters contain a wealth of information that is occasionally hard to grasp when you don’t have all the pieces of the puzzle yet, making this a novel that merits more than one reading. Everything noticeably clicks into place about a third of the way in, and from that point on, the novel switches from mysterious and intriguing to impossible to put down. It may take some time to find your bearings, but once you have the vocabulary, the moral complexity, and the basic building pieces of the plot, The Killing Moon simply soars.

Characterization is usually subtle and indirect. We meet everyone in mid-stride, not as their individual stories are starting. Salient facts are sometimes tossed at you underhandedly, at times when you may not expect it. There’s some misdirection here. The nature of first meetings, the possible true reason for an attraction between two people, the family background that may or may not play a role — all of these are introduced later on, after you’ve already read a good chunk of the novel, and all of them will make you reconsider previous events and their implications in a new light. Combine this with the way this fantasy universe is revealed, and it’s again clear that this book rewards more than one reading.

Once the characters are firmly established, their interactions continue to gain in poignancy and depth, resulting in a few scenes that are so emotionally powerful, they’re almost shocking. All of them are told in N.K. Jemisin’s rich prose, appropriately giving the entire novel a dreamlike quality. This review has barely covered a fraction of the wealth of themes and plots that run through this novel: politics, sexuality, magic, religion, and the various places where they intersect. The Killing Moon has so many strengths that the main plot almost becomes an afterthought; it’s simply a pleasure to soak up the novel’s atmosphere and enjoy the depth of the world-building and characterization.

As strong as N.K. Jemisin’s first novel The Hundred Thousand Kingdoms was, it also had some of the flaws that are common for a debut. Still, you could easily see that this author was just gearing up for something great. Some debuts are clearly books or series the author has been working on forever, leading to an almost inevitable sophomore slump. With The Hundred Thousand Kingdoms, I knew that wouldn’t be the case, and The Killing Moon is the proof. N.K. Jemisin’s newest novel is not as accessible as her Inheritance trilogy, but if you’re willing to stick with it, The Killing Moon is a rich, rewarding and unique novel that will remain with you for a long time to come. Highly recommended.

This review was originally published at Tor.com on April 27th, 2011, and cross-posted here a few weeks later.

This entry was posted in Fantasy, Reviews and tagged N.K. Jemisin, Orbit. Bookmark the permalink.

2 Responses to The Killing Moon by N.K. Jemisin