Near + Far by Cat Rambo 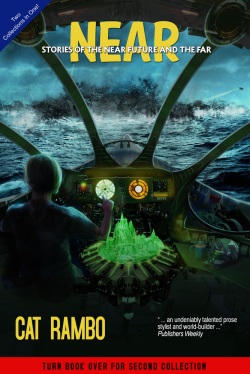 Cat Rambo has published over a hundred science fiction and fantasy short stories to date, in places like Asimov’s, Weird Tales, and on Tor.com. The field of short genre fiction is quite crowded nowadays—which is wonderful, don’t get me wrong—but Cat Rambo’s name always jumps out at me whenever I see it in a Table of Contents. Sure, that’s partly because it’s just such a cool name, but much more because, after reading a few of her stories over the years, I was and still am captivated by her unique voice and imagination.

Because of this, I was thrilled to find out about Near + Far, a brand new collection of Cat Rambo’s short fiction. It’s being released on September 19th by Hydra House, and if you have any interest in SF short stories, this is definitely a book to look out for—not only because the stories contained in it are great, but also because of its gorgeous design.

Near + Far actually consists of two separate collections of stories, each with a notably different atmosphere. “Near” contains stories set mostly in the near future, or at least in fictional universes that are closer to our own time and reality, whereas the stories in “Far” are set further in the future. Most of the stories in “Near” are set on Earth; “Far” contains more space stations, space ships, aliens, and so on.

What’s really neat here is that Near + Far is designed like one of the old Ace Doubles: each collection has its own cover, and you flip the book over to get to the other set of stories. I just learned recently that this binding style is properly called tête-bêche, which is all fine and good but for me (and I’m sure many SF fans) it’ll always scream Ace Double. It may be nothing new, but it was such a cool surprise to see that bright red “Turn book over for second collection!” banner along the bottom of the cover that it just made me enjoy the stories that much more.

Combined with the beautiful cover illustrations by Sean Counley and interior art by Mark Tripp, this is simply a lovely book in the physical sense. It’s easy to see why the author called Near + Far an “expression of my philosophy regarding books” on her blog. (For people who get the ebook version, the introduction mentions a mobile app that offers additional material, including audio versions of some of the stories, but this wasn’t available yet at press time.)

And then there are the stories, of course. If you’ve read Cat Rambo before, you’ll know what to expect: her prose is smooth as a dream but often hides an incredibly sharp, emotive edge. At times, she gives more depth to a character in a handful of pages than many novelists manage in hundreds. Thematically, there’s a lot of depth here too, but the author has a light touch with this, making most of these stories the kind you’ll want to read, let simmer for a while, and re-read. The few exceptions to this, like the stunning story “Seeking Nothing,” are very direct and almost uncomfortably powerful even the first time you read them. Balancing things out, there are also a few funny stories here, like “Ms. Liberty Gets a Haircut,” a quirky story about an all-female (although that’s a point of contention) group of superheroes.

One of the many strengths of this collection is its sheer variety. There are the two main sections with their own distinct atmospheres, of course, but even within those it’s hard to find two stories that are alike: flash fiction and full length stories, drama and humor, stories from the perspectives of humans, aliens, superheroes. The only obvious connections are between a few stories in “Far” that feature the character Angry Rose and are set on or around the “Twicefar” space station. The range of styles and concepts on display in this set of almost two dozen stories is astounding.

In the introduction to Near + Far, Cat Rambo says: “Sometimes when you’re writing, you feel you’re leveled up, that you’ve moved through some plateau and jumped to a new degree of skill. Some of these stories are ones that let me know I’d leveled up.” I can only agree: Near + Far is a wonderful collection.

This review was originally published at Tor.com on September 19th, 2012.

1 Response to Near + Far by Cat Rambo