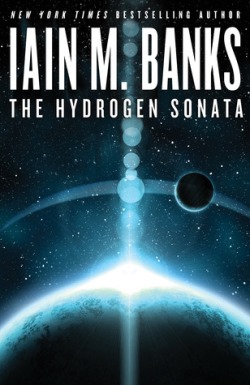 Has it really been 25 years since Consider Phlebas, the first novel in Iain M. Banks’ Culture series, came out? My goodness. Does this make anyone else feel old at all? Not to worry though: a new novel in this stunning series is always cause for celebration, and in this case doubly so, given that this book is the tenth in the series according to Orbit (including the short story collection The State of the Art, which contains some Culture-related pieces) and marks a quarter century of Culture novels.

Fans have probably already ordered or pre-ordered The Hydrogen Sonata, and for them this review will just be preaching to the choir. Newcomers may be busy trying to decide if this is the time to jump in—and then get to navigate the various theories on What’s the Best Place to Start, given that the internal chronology of the series doesn’t match the publication order and the only aspect most of these novels overtly share is their setting: the benevolent post-scarcity interstellar empire known as the Culture, in which the human inhabitants live in utopian, semi-anarchic bliss managed by immensely powerful artificial intelligences known as Minds. (Number one on my personal list of fictional universes I’d like to live in, by the way.)

So, The Hydrogen Sonata. (The name, incidentally, comes from a piece of music written for the bodily acoustic Antagonistic Undecagonstring, an instrument almost impossible to play unless you have more limbs than the average humanoid, not to mention that it actually hadn’t been invented yet at the time the piece was composed.) From the text we know that the new novel is set about a thousand years after the Idiran War and about four centuries after the events portrayed in Excession. In The Hydrogen Sonata, one of the Minds thinks Special Circumstances should have a sub-department that focuses specifically on the Sublime, and in Surface Detail this department (the Numina) exists. All of this would seem to place the new novel some time before Surface Detail but well after the other novels in the series. However, what’s probably more exciting, especially for readers who are fascinated with the internal timeline of this universe, is that The Hydrogen Sonata contains lots of info about events that happened before and during the founding of the Culture. (It also refers frequently to Excession, but more about that later.)

You see, there’s this race called the Gzilt who, way back, were involved in the discussions and negotiations between the various humanoid races that would later end up getting together and calling themselves the Culture. At the last moment the Gzilt decided not to join the new project/civilization/empire/whatever and went their own separate way. Now, several millennia later, they are on the verge of Subliming. The entire race is counting down the days until they move on this next, glorious, mysterious stage of existence… until some news surfaces that calls everything into question. The only person who may have information about what really happened back then is a Culture resident who is believed to be almost ten thousand years old.

The novel follows several storylines over the 24 days that lead up to the planned Gzilt Sublimation. (The chapters are actually numbered S -24, S -23 and so on.) A Gzilt musician called Vyr Cossont (four-armed, so she can play that instrument mentioned earlier) is recruited by her empire’s authorities to try and find the ancient Culture resident who may be able to shed light on what happened in the days when the Gzilt and the proto-Culture split on friendly terms. Meanwhile, a powerful Gzilt politician is scheming and maneuvering for position in the final days before the entire race Sublimes. Part of this maneuvering involves two other, less advanced races who are hovering around, hoping to scavenge technology and territory left behind when the Gzilt finally do Sublime. And, maybe most interestingly, a group of Minds are trying to monitor and, as is so often the case with the Culture, subtly influence all those events in and around Gzilt space. (Why? Well, in their own words, “we have a reputation for enlightened interference to protect here.”) 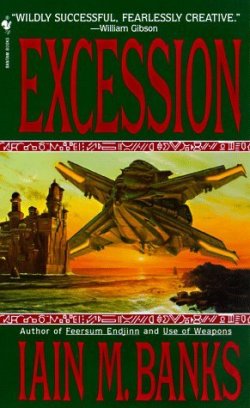 If you’re a fan of the novel Excession (it seems to be a love-it-or-hate-it one in the series), you will probably enjoy The Hydrogen Sonata because there are many references to the events portrayed in that novel. The Interesting Times Gang is mentioned more than once, and this new group of Minds managing the Gzilt situation message back and forth in a way similar to the ITG. As usual with Culture novels, you don’t really need to remember all the details or even really be familiar with that previous book to “get” The Hydrogen Sonata, but I’m sure fans of Excession will get a kick out of these parts of the new novel.

(By the way, seeing this connection led me to the—probably entirely incorrect—theory that Banks has been systematically referring back to the earlier books of his series in order of publication. Look to Windward obviously refers to the very first book, Consider Phlebas. Skipping Matter for a second, Surface Detail linked to the third book, Use of Weapons, and now The Hydrogen Sonata connects with Excession. The only one I’m not sure of is Matter, which should have some connection with The Player of Games for my theory to work, but I don’t remember if there’s something like that in the books. Time for a reread, I guess.)

The Hydrogen Sonata focuses, more than any other Culture novel so far, on the mysterious next stage of life known as the Sublime and its relation to what one character calls the “chaos, uncertainty and existential short-termism of the Real.” In the past, Banks has said that he planned to “maintain the mystery, and don’t try to think unthinkabilities…” on that subject, so maybe it’s not surprising that here, with his customary lack of gravitas, he often has his characters treat the Sublime like a lark, referring to it with a long series of comical terms like the “big kablooie of transcendent smashingness” and “buggering up one’s own […] fundament.”

The novel is fairly fast-paced, with large parts reading like a particularly hectic Consider Phlebas-style wild goose chase, but as usual Banks frequently slams on the breaks for lengthy descriptions of the technological marvels to be found in his fictional universe. It’s kind of astonishing that, 10 books and 25 years later when we all know what GSV’s and orbitals are and what sort of insane marvels the more advanced races in the galaxy came up with in the far past, there are still moments of good old-fashioned sensawunda to be had here. There are one or two other current writers who can make me feel like I’m 12 years old and reading SF for the first time again, but for me Banks is by far the best in that respect.

And that’s why a new Culture novel is always one of the most anticipated releases of the year for me. In the case of The Hydrogen Sonata, I wouldn’t call it one of the very best novels in the series—especially coming on the heels of Surface Detail, which blew me away—but it more than delivers everything I always hope to find in a Culture novel. It’s a solid middle-of-the-pack Culture story, which as far as I’m concerned still puts it head and shoulders above 99% of the rest of the genre. I mean, there’s a GSV called Just The Washing Instruction Chip In Life’s Rich Tapestry in this book. When it all comes down to it, what else do you really need?

This review was originally published at Tor.com on October 8th, 2012.

3 Responses to The Hydrogen Sonata by Iain M. Banks