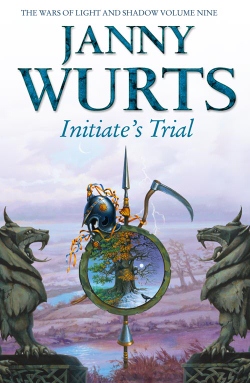 First things first: Initiate’s Trial is the ninth book in the Wars of Light and Shadow series by Janny Wurts. I’ve tried to avoid spoilers in this review, but if you haven’t read the earlier books in the series and want to enter into it without any preconceived notions, you may want to skip this review and instead check out the one I wrote about series opener The Curse of the Mistwraith here. (Short summary: it’s brilliant, and any fantasy fan who enjoys intellectually and emotionally challenging novels should read this series.)

Initiate’s Trial may be the ninth book in this series, but it’s also the first book in a new arc, meaning the start of a new subchapter within the larger series. In addition, for the first time Janny Wurts has allowed a significant amount of time to pass between the ending of the previous book and the beginning of the new one: Initiate’s Trial starts about two and a half centuries after the events described in Stormed Fortress. Because of this, the new novel may initially feel like a series reboot, but you’ll quickly find out that this is somewhat deceptive.

After all, Janny Wurts has been exploring the same basic conflicts and characters since the very beginning of the series. Despite the elapsed time since the previous book, Initiate’s Trial is very much a direct continuation of the ongoing story, following the same people (thanks to their unnaturally long life spans) and exploring the same setting. Back when I started reading this series, I was told that “it doesn’t sprawl, it deepens”. That’s about as accurate a description of what Janny Wurts is doing here as I’ve read.

At its most basic, the Wars of Light and Shadow series follows the conflict between the two half-brothers Arithon and Lysaer, who have been cursed with lifelong enmity. Their fates are closely intertwined with that of Paravia, a fantasy world with enormous detail and scope.  As the series continues, Janny Wurts gradually reveals more and more details about the history of the world and the origins of its various factions, resulting in a fascinating, multi-layered setting that, nine books in, still hasn’t released all of its secrets. Likewise, the two main characters and their large supporting cast grow and evolve throughout the series until they reach a level of depth that’s practically unparallelled in modern fantasy. 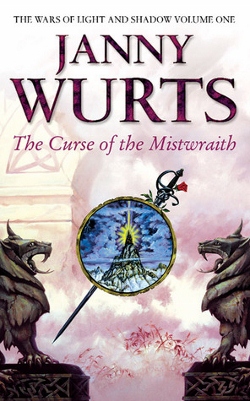 One of the surprising things about Initiate’s Trial is that Janny Wurts does introduce a few new characters to this already very rich mix: we meet a small family of farmers and quickly get immersed in their simple lives. Even though these are brand new characters, after fifty or sixty pages they quickly become surprisingly tangible, real humans. Fans of this series know that Janny Wurts can generate a truly astounding level of emotional intensity with her main players, but even this brand new family’s relatively small, private drama very quickly becomes moving and memorable.

Another interesting aspect of this new novel is connected to the two and a half centuries that passed since the end of Stormed Fortress. I don’t want to spoil some of the bigger changes that occurred in that time span (the author gradually reveals them as the new novel progresses) but because of those 250 years, the events of the first three arcs in the series are starting to take on the aspect of history or even myth, embellished by years of recounting. It’s becoming easier and easier to see how we could have reached the situation described in that mystifying prologue that started off the very first book of the series. As Janny wrote back then, “the factual account lay hopelessly entangled between legend and theology”.

Out of all the many strengths this series consistently displays, its vast historical scope is probably the one I admire the most. In my mind, that aspect of it falls somewhere on the intersection of the Malazan books by Steven Erikson and Ian C. Esslemont, the Recluce Saga by L.E. Modesitt Jr., and the Middle Earth books by Tolkien. Going into much more detail would ruin some of the juiciest mid-series revelations, so I’ll leave it at that—as much as I want to throw some of them into this review to entice readers who may have no idea what to expect.

One more thing, maybe: despite the vast historical scope of this story, it always puts the human perspective at an equal, if not higher, level of importance. It’s just one of the many surprising qualities of these books: they contain elements that will please people who enjoy approaching a fantasy universe with an analytical mind-set (let’s say, making a wiki or studying the Paravian language) while at the same time connecting to readers who first and foremost look for a deep emotional connection to story or characters. As a matter of fact, those two extremes feed off each other, with each one enhancing and emphasizing the other one as the layers are gradually revealed and the levels of emotionality reach new heights.

The only minor issues I have with Initiate’s Trial are in comparison to the rest of the series, because taken just on its own merits, it stands head and shoulders above 99% of today’s fantasy output. It’s a shame that the new novel doesn’t include a summary of the events that happened in previous books, like many of the earlier installments in the series did. Because this is such a complex tale, it would have been helpful to be able to review that information, especially at the start of a new arc. On the other hand, Janny Wurts does weave the most pertinent bits of past story into the novel as usual, and the glossary has again been updated to include the events leading up to this point, so while you may experience some disorientation early on, you’ll be able to find your bearings.

Also, as the first book of a new arc, Initiate’s Trial is in a sense the start of a new chapter in the series. Much like with Fugitive Prince, which launched the previous arc, that means this new novel spends some time setting up the story and so may not be as fully satisfying as other parts of the series when taken on its own. Despite the familiar mid-book climax followed by the relentless onslaught of tension leading up to the ending, it’s clear that this is one half of a tale that will be completed in Destiny’s Conflict, the novel Janny Wurts is currently working on.

And after that, the eleventh and final volume of the series, Song of the Mysteries, which will conclude a series that’s already two decades in the making. I can’t wait. I may actually plan a vacation around that release, so I can seclude myself in a remote location for the first reading. I realize that I occasionally get a bit hyperbolical when reviewing the Wars of Light and Shadow series, but the simple truth is that it is, in my opinion, one of the most impressive accomplishments in all of modern fantasy. It’s just that good, and as mentioned at the start of this review, any reader who enjoys intellectually and emotionally challenging fantasy literature should check it out.

This entry was posted in Fantasy, Reviews and tagged HarperCollins, Janny Wurts. Bookmark the permalink.