Posted on December 5, 2012 by Stefan (Far Beyond Reality) 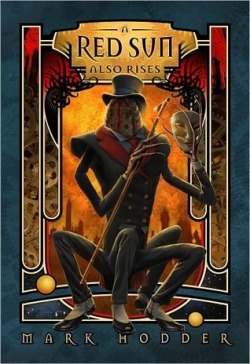 There are many possible reasons I pick books to read and review. I always like giving debuts a try. Conversely, I have a long list of favorite authors I’ll read almost anything by. A plot summary that promises some depth and/or innovation usually works. Sometimes a good cover illustration will even pull me in. But my favorite reason of all to pick an unfamiliar book from the stack is a plot summary that’s so, well, so plain weird that I couldn’t possibly turn it down.

A perfect example of this is Mark Hodder’s newest novel A Red Sun Also Rises, which, in addition to the grin-inducing Hemingway-by-way-of-Chtulhu title, also features a synopsis that adds a whole new level of weird with every new paragraph.

When Reverend Aiden Fleischer, vicar of the sleepy town of Theaston Vale, finds a hunchbacked, light-sensitive and crippled vagabond named Clarissa Stark begging at his door, little does he suspect it’s the start of an adventure that’s literally out of this world!

Bribed by an unscrupulous family, Fleischer and his companion flee to London’s missionary college, but in wicked Whitechapel, the faithless priest stumbles upon one of Jack the Ripper’s victims and becomes convinced that he himself is the notorious killer. With her friend’s mind shattered, Miss Stark is relieved when they are both posted to the far away Melanesian island of Koluwai, but here they encounter an even darker evil, one that transports them to another planet.

Beneath the twin suns of the planet Ptallaya, Fleischer and Stark encounter an alien species, the Yatsill, master mimics who, after gaining access to Miss Stark’s mind, create their own bizarre version of Victorian London.

But Fleischer and Stark’s new home from home is not safe, for the Blood Gods will soon invade, and if he is to defeat them and rescue the woman he’s come to love, Fleischer must first face his own inner demons!

By the time I reached the Blood Gods part, my eyebrows were hovering, cartoon-like, a few inches above my hairline, and I was more than ready to dive in. Dear reader, I’m pleased to report that A Red Sun Also Rises didn’t disappoint: it is, as expected, pleasingly weird, but more importantly, it’s also quite good.

A novel like this one wouldn’t work without strong characters to anchor it, and fortunately Hodder provides two of them right from the onset. The young Reverend Fleischer is a confused but well-meaning man, thrust into a position of faith he doesn’t truly feel he deserves. He narrates the novel in the reserved, slightly formal tone you’d expect from a man of the cloth in the Victorian era. The result is a story full of understated but genuine psychological torment and, once Hodder reaches the more surreal parts of the novel, a personal evolution that’s fascinating to watch.

The second main character is Clarissa Stark, the “hunchbacked, light-sensitive and crippled vagabond” who arrives at Fleischer’s door. Her tragic backstory, which at first feels like a combination of social commentary and emotional padding for the novel, becomes more and more relevant as the story progresses. She’s also a welcome, level-headed counterweight to Fleischer’s frequent bouts of stammering bewilderment and insecure navel-gazing, which otherwise might have ended up more than a bit annoying. It’s probably ironic that the hunchbacked lady is the one who helps Fleischer grow a spine, but regardless—both of them experience significant personal growth, even in the midst of planet Ptallaya’s truly surreal chaos.

And as to Ptallaya and what happens there, I’ll let you discover that for yourself. Just believe me when I say that, even though the plot summary above may seem a bit spoilerific, you haven’t seen anything yet. Mark Hodder somehow turns a setting that initially seems like an elaborate surreal joke into a surprisingly complex edifice that continues to offer up twists and turns to the very end. That feeling of increasing bewilderment I had while reading the plot summary? It continued throughout the novel and up to the final page.

A Red Sun Also Rises does have a few minor issues. My main complaint is that Hodder’s writing is occasionally too heavy-handed, as if he wants to make absolutely, completely sure that every single reader will “get” every bit of meaning, e.g. when setting up too-obvious contrasts between characters or settings, even to the point of making them chapter titles (Chapter 1: Clarissa and Alice, Chapter 2: Whitechapel and Koluwai, and so on). I also felt that one character’s elaborate “Upper Class Twit” speech mannerisms, which were at first completely hilarious and provided one of the funniest moments in the entire novel, were spun out way too much.

But again, those are minor complaints. Despite its psychological depth and its high level of surrreality, A Red Sun Also Rises somehow also manages to be an incredibly entertaining, fast-paced page turner. Imagine if Jasper Fforde and a late-career Philip K. Dick read Brian Aldiss’ Helliconia trilogy and decided to try something similar, but, you know, weird it up a bit? That’s what Mark Hodder’s A Red Sun Also Rises occasionally feels like. This strange, surprising novel combines elements of steampunk and planetary adventure in ways I just hadn’t seen done before, and that alone makes it more than worth a look.

This review was originally published at Tor.com on November 28th, 2012.

And now for the giveaway! Thanks to the kind folks at Pyr, I have one copy of A Red Sun Also Rises to giveaway to one lucky reader in the US or Canada. To enter, simply send an email with subject line “RED SUN” to fbrgiveaway AT gmail DOT com with your full name and mailing address. One entry per person, please: multiple entries will result in immediate disqualification, but please feel free to tell your friends! Please note again that this giveaway is limited to the US and Canada.

The giveaway will end on Sunday, December 9th at 11:59 PM, and I’ll announce the winners the following day. Void where prohibited by law, rules are subject to change, harmful when swallowed, batteries not included.

This entry was posted in Reviews, Science Fiction and tagged Mark Hodder, Pyr. Bookmark the permalink.