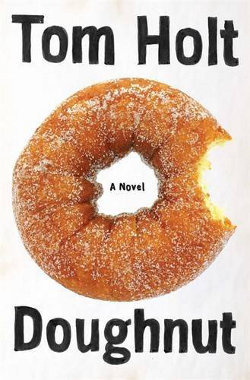 Theo Bernstein accidentally put a decimal point one place to the left instead of the right and, thusly, caused the Very Very Large Hadron Collider to explode, thereby disintegrating an entire Alp and becoming one of the most hated men alive. Coincidentally, Shliemann Brothers, the company that held all his investments, went bust at just about the same time, so, well, things aren’t going great for Theo.

After Theo receives an apple, a seemingly empty bottle and a small pink powder compact as part of an inheritance from his friend and former physics professor Pieter van Goyen, he ends up working at a huge but mostly empty hotel. There, he accidentally stumbles into what appears to be a parallel universe, and from that point on, things start getting weird…

Doughnut is the first novel I’ve read by Tom Holt. Even though it’s not that great, I laughed out loud more than once and read the entire thing in record time. Despite some reservations, I have to give it a somewhat reluctant thumbs-up, if mostly for entertainment value. I’m thinking “it was okay” more than “it was great”, but at the same time I know I’ll probably read more by Holt when I’m in the mood for this type of comical SF, so I can’t in all fairness say it’s a bad novel, right?

Still, there are several problems with this novel. The plot is more ridiculous than silly, and it feels like it’s going nowhere for most of the middle section of the book. The characters are stick figures. A few of them are introduced and then seem to disappear for no good reason. After a long build-up, the entire situation is resolved when the main character suddenly, inexplicably, figures it all out and then proceeds to explain everything in a long lecture dialogue.

I’m sure writers of comical SF and fantasy such as Tom Holt and A. Lee Martinez are sick and tired of getting compared to Terry Pratchett and Douglas Adams, but in this case, the novel wears its influences so clearly that it verges into being a homage. There’s one section that practically screams Improbability Drive. There’s a joke about putting pasta and antipasta together that I know I’ve seen before in either Pratchett or Adams, although I can’t for the life of me remember in which novel.

The main problem I had with Doughnut is that, despite the continuous flow of funny jokes, the craft that someone like Terry Pratchett brings to his works is just not there. With Pratchett you get solid world-building, brilliant plotting, social commentary, fascinating characters. That makes his novels much more than just vehicles for jokes. As it used to say in his bio, he “has occasionally been accused of literature.”

The chances of that happening to Doughnut are small. It’s essentially just a vehicle for a long set of absurd situations and silly jokes about parallel universes. Approach the novel expecting that, and you’ll have a good time with it. Still, despite all this criticism, I actually plan to read more books by Tom Holt because, well, sometimes you just need a good laugh, right?

This entry was posted in Reviews, Science Fiction and tagged Orbit, Tom Holt. Bookmark the permalink.

1 Response to Doughnut by Tom Holt