The Willful Princess and the Piebald Prince by Robin Hobb 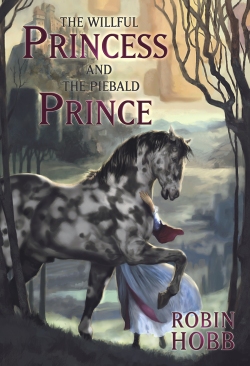 Over the years, Robin Hobb’s Realm of the Elderlings has become one of fantasy’s most beloved settings. So far, the series consists of three completed trilogies (Farseer, Live Ship, and Tawny Man), as well as the Rain Wilds Chronicles, a four book cycle whose final installment is due out in March. In addition, there are a number of shorter works set in this fantasy universe. The most recent of these is the brand new novella The Willful Princess and the Piebald Prince.

It’s best to think of The Willful Princess and the Piebald Prince as a prequel to the Farseer Trilogy, and like almost all prequels, it’s better to read it after you’ve read the books that take place later in the internal chronology. So, if you’re new to the Realm of the Elderlings, grab a copy of Assasin’s Apprentice instead.

Fans of the Farseer Trilogy will remember some of the enduring legends in the Six Duchies that are mentioned throughout the books. The Pocked Man is referred to several times, as is an almost equally reviled figure in the realm’s history: the Piebald Prince.

In this new novella, Robin Hobb moves back in time to describe the historical origins of the Piebald Prince’s legend. The story is set entirely inside Buckkeep Castle in the Duchy of Buck, and focuses on a few members of the royal Farseer line, most notably the (willful) Princess Caution. It’s Caution’s doomed romance that forever alters the history of the Farseers, echoing down the years until FitzChivalry’s tale gets started in Assasin’s Apprentice and beyond.

Robin Hobb uses a familiar but effective technique to put a spin on this story: the narrator is not one of the relatively powerful title characters but instead young Felicity, the lowborn daughter of Caution’s cunning wet-nurse who becomes a privileged servant and close confidante of the Princess. The most interesting aspects of this novella are the increasingly complex relationship between Felicity and Caution, and the twist Felicity’s narration puts on the story.

After all, history is written by the winners. In The Willful Princess and the Piebald Prince, we get a different look at the Six Duchies, one in which Witted ones weren’t yet reviled for their “beast-magic” but instead appreciated for their gift. The story shows how we got from this point to the way things are at the start of Assassin’s Apprentice—and Felicity, Caution and the Piebald Prince play an integral part in that transition.

Their tale is a grim one. Everyone manipulates everyone else. Love leads to ruin. Calculation only has slightly better results. Rulers setting aside their own feelings and happiness for the sake of the realm isn’t a new idea, but in this novella even common folks make utterly ruthless decisions. Robin Hobb has never been known for her cheerful stories, but this one feels particularly bleak—maybe because, being a prequel, we know more or less where things are heading.

The author’s prose is as beautiful and stately as ever. Felicity’s slow, formal narration of the historical events she was witness to is, for the most part, enjoyably subtle, with maybe just one exception: her increasing tendency to emphasize that her description is true to the facts. Towards the end, after the third or fourth time in as many pages of her repeating this, Robin Hobb’s point becomes a bit too obvious.

But still. The Willful Princess and the Piebald Prince is, all in all, a lovely addition to the Realm of the Elderlings universe, a dark but enjoyable take that fills in an intriguing part of Six Duchies history. Recommended for fans of the author.

This review was originally published at Tor.com on February 25th, 2013. You can also find an excerpt there.

This entry was posted in Fantasy, Reviews and tagged Robin Hobb, Subterranean Press. Bookmark the permalink.