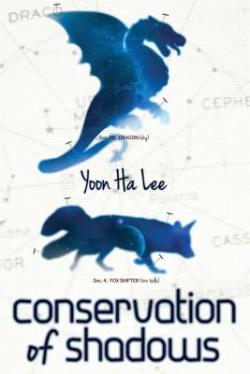 Conservation of Shadows by Yoon Ha Lee is a terrifying collection of short stories to review. The stories themselves are rarely scary in the traditional sense, but their individual complexity and astonishing level of variety make this an impossible book to encompass in just a few paragraphs.

It’s not that there aren’t any hooks or approaches; it’s more that there is such a bewildering number of them that, as a reader or reviewer, you feel somewhat like you’ve wandered onto a hitherto undiscovered island full of skittery, unfamiliar species that keep turning out to be something else than what you initially expected. More than a review, Conservation of Shadows needs its own monograph. Towards a Taxonomy of Yoon Ha Lee’s Short Fiction, maybe.

Yoon Ha Lee’s first professional sale came in 1999—to the Magazine of Fantasy and Science Fiction, no less. Since then she’s released about thirty pieces of short fiction into the wild, in markets such as F&SF, Lightspeed Magazine, Clarkesworld, Beneath Ceaseless Skies, and here on Tor.com, among others. Her works have been included and honorably mentioned in annual “best of” anthologies, and two of her stories (“Flower, Mercy, Needle, Chain” and “Ghostweight”) were finalists for the Sturgeon Award. Conservation of Shadows includes sixteen of the author’s best stories, as well as a great introduction by Aliette de Bodard and extensive story notes by the author herself. It is, to the best of my knowledge, the first collection of Yoon Ha Lee’s short fiction.

I’m going to take the opening paragraphs of the very first story in this collection as an example to develop some ideas. This quote is from the astonishing “Ghostweight,” originally published in Clarkesworld in 2011:

It is not true that the dead cannot be folded. Square becomes kite becomes swan; history becomes rumor becomes song. Even the act of remembrance creases the truth.

What the paper-folding diagrams fail to mention is that each fold enacts itself upon the secret marrow of your ethics, the axioms of your thoughts.

Whether this is the most important thing the diagrams fail to mention is a matter of opinion.

So, obvious first observation: Yoon Ha Lee’s prose is gorgeous. It’s the kind of prose you want to read out loud. Every word counts, although that’s not always obvious upon first reading. Sometimes what’s left unsaid is equally meaningful, as the last sentence of the quote already suggests. As a rule, the author manages to evoke and/or imply a wealth of information in these relatively short tales: theories, histories real and imaginary, races, concepts you’ve never seen in the genre.

There’s a striking contrast between the gentle images Yoon Ha Lee uses and the all-but-gentle objects to which they refer. The kite in that quote from “Ghostweight” is a war-kite: a far future interstellar battle ship. Other stories feature swanships and ships powered by mothdrives. In one story, music is used as a weapon; in another, a book. Paper dolls. Each word in the title “Flower, Mercy, Needle, Chain” refers to a different gun.

Likewise, there’s a strange, pleasing dissonance created by the simple, naturalistic bent of these same images and the science level they refer to. Sometimes this turns out to be “technology sufficiently advanced to be indistinguishable from magic,” sometimes actual magic. (There are both interstellar empires and necromantic mecha to be found in Conservation of Shadows.) The most advanced concepts—also frequently the most terrifying ones—are often expressed using single words that could be found in any child’s vocabulary.

This is, obviously, deceptive. Note the author also uses “diagram” and “axiom” in that brief origami quote above. These stories frequently build out from (but rarely make explicit) theoretical starting points that might please fans of hard SF. Warfare is waged by means of competing calendars. One clash of civilizations appears to be taking place almost entirely in probability space. I imagine the author wincing at these clumsy summaries, but in my defense, she recently summed up every story in Conservation of Shadows using just a handful of words each on her blog. A few examples: “theorem magic,” “quantum chess warfare,” “tactical linguistics.”

In a recent interview on Clarkesworld, Yoon Ha Lee explains some of her thinking behind all of this: much like a proof, she builds her stories towards a pre-established conclusion. There’s a didactic methodology to this: extraneous elements and unnecessary arguments are left out. Of course, as readers we don’t know the destination beforehand. In the same interview, Yoon Ha Lee frames this technique as an assassination: “I don’t want the reader to see the short sharp point clearly from the beginning, but I want it to make sense afterward as the angle of attack.”

All of this explains, at least in part, the reason behind these stories’ notable economy of words, their usage of deceptively recognizable imagery and innocent-seeming vocabulary. To be clear, the point is (usually) not a “gotcha”-type surprise revelation; rather, the author uses the stories’ meticulous construction to guide the reader towards understanding. If there’s any disorientation, it serves a point, which is frequently building a unique atmosphere and implying a much broader fictional universe than what’s glimpsed in the stories.

The purest examples of the author’s unique narrative approach may be those stories that start out by deviating from traditional storytelling technique. “Iseul’s Lexicon” begins with a fictional lexicon entry. (She really wasn’t kidding about the “tactical linguistics” thing earlier.) “The Black Abacus” includes an exam question with dizzying implications, and is structured around chess moves. “A Vector Alphabet of Interstellar Travel” is something like Calvino by way of Borges and Moorcock. The author’s notes for this story (which was originally published on Tor.com) made me happy: “I am aware that there is an egregious amount of arrogance involved in the idea of pastiching Calvino, but […] I figured it wouldn’t tear a hole in the universe for me to have a go.”

The rare missteps in this collection occur when the author indulges in prose that’s just a shade too flowery. In the story notes, she refers to this as “overwhelming the material with tinsel” and admits that she’s “already prone to that fault.” If so, this is very much an exception rather than the rule: most of the time, Yoon Ha Lee is incredibly efficient in her expression of ideas and plot.

Because of this efficiency, the highly informative story notes included at the back of this collection are more than welcome. Read story, read notes, re-read story. Rinse and repeat. As an example: Yoon Ha Lee, who is Korean-American, makes a few references to Korean history, something I suspected but didn’t fully understand during my first reading. Those stories have broader application and meaning, but learning about their origins definitely added a new layer to my appreciation.

The highest praise I have for this collection is simply this: in a genre that all too frequently works within the same old patterns and strictures, Yoon Ha Lee’s stories are unique. After reading Conservation of Shadows, I believe I could pick any future story by this author out of a blind line-up. That’s not because the collection is monotonous or repetitive—far from it—but because the author’s genre sensibility and writing style are completely sui generis. Conservation of Shadows is an excellent collection of stories: filled with beautiful puzzles of thought and emotion in which math and magic frequently walk hand in hand. Highly recommended.

This review was originally published at Tor.com on May 9th, 2013.

5 Responses to Conservation of Shadows by Yoon Ha Lee