Lookin’ Good: The Bread We Eat in Dreams by Catherynne M. Valente (includes Table of Contents) 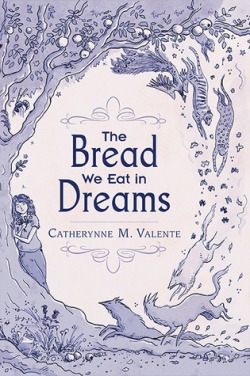 I don’t get extremely excited about many ARCs anymore. Don’t get me wrong, finding any book in my mailbox always feels a little bit like Christmas morning, but some books are just special, and this one… Well, let’s just say I may or may not have been running around in little circles in the kitchen yelling “Do you know what this is do you know what this is?!” while my wife looked on in great bemusement. The surprise was even sweeter because, somehow, I had no idea this collection was in the works.

The Bread We Eat in Dreams is Catherynne M. Valente’s forthcoming collection of short fiction and poetry, due out in late 2013 from Subterranean Press. The ARC says December 31st, the publisher’s website says “due to ship in November.” Whatever the case may be, just place your pre-orders now.

Here’s the publicity copy and the full Table of Contents from Subterranean Press. Careful you don’t drool on your keyboard.

Subterranean Press proudly presents a major new collection by one of the brightest stars in the literary firmament. Catherynne M. Valente, the New York Times bestselling author of The Girl Who Circumnavigated Fairyland in a Ship of Her Own Making and other acclaimed novels, now brings readers a treasure trove of stories and poems in The Bread We Eat in Dreams.

In the Locus Award-winning novelette “White Lines on a Green Field,” an old story plays out against a high school backdrop as Coyote is quarterback and king for a season. A girl named Mallow embarks on an adventure of memorable and magical politicks in “The Girl Who Ruled Fairyland—For a Little While.” The award-winning, tour de force novella “Silently and Very Fast” is an ancient epic set in a far-flung future, the intimate autobiography of an evolving A.I. And in the title story, the history of a New England town and that of an outcast demon are irrevocably linked.

The thirty-five pieces collected here explore an extraordinary breadth of styles and genres, as Valente presents readers with something fresh and evocative on every page. From noir to Native American myth, from folklore to the final frontier, each tale showcases Valente’s eloquence and originality.

This entry was posted in News and Other SFF-Related Ramblings and tagged Catherynne M. Valente, Subterranean Press. Bookmark the permalink.

2 Responses to Lookin’ Good: The Bread We Eat in Dreams by Catherynne M. Valente (includes Table of Contents)