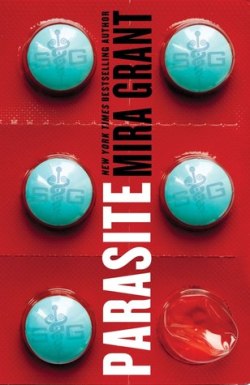 In Mira Grant’s new novel Parasite, a major new scientific development has transformed the medical world: the Intestinal Bodyguard is a genetically engineered parasite that lives in your bowels and can secrete drugs directly into your digestive tract. It’s nothing short of a medical revolution.

To be absolutely clear here, what we’re talking about is a tapeworm. That’s right: a company developed a benign tapeworm that people voluntarily ingest to stay healthy. It may be just me, but I cannot even begin to fathom the size of the marketing budget a company would need to convince people to voluntarily become hosts to a worm that lives in your gut. (Just for fun, look up some pictures of tapeworms. Look up how they used to be removed, prior to antibiotics. Nightmares. Nightmares, I tell you.)

Despite the fact that the Intestinal Bodyguard idea stretched my ability to suspend disbelief AND grossed me out something fierce, I have to admit that Mira Grant came up with a surprising new SF concept in Parasite. She also follows one of the most classic and, for me, most enjoyable science fiction story structures: look at the present, add one major scientific development, then extrapolate a future from that point on.

Parasite‘s main character is Sally, a young woman who suffered a near-fatal accident several years before the start of the novel. Her life was saved, thanks to the Intestinal Bodyguard, but her memory and even her personality were erased. She’s essentially become a different person, lacking any recollection of her life before the accident. (Interestingly, this is another classic story pattern, but probably one of my least favorite ones: amnesia. If I never have to read a story featuring amnesia again, it’ll be too soon. Same for plots heavily involving Doppelgängers, for that matter.)

Sally’s history is so unique that she’s basically become a one person case study for SymboGen, the company that developed the Intestinal Bodyguard. She’s monitored constantly, has to check in for exams and interviews regularly, and even has a job (at a pet shelter) that’s funded by the company. Sally hates being a guinea pig, but it’s not like she has much choice.

So far, so good. Mira Grant (a pseudonym of multiple award-winning author Seanan McGuire) knows how to capture and hold a reader’s attention. The dialogue is realistic, the pace is lively, it’s a fun read. I actually enjoyed this novel, despite the tapeworms and despite the amnesia thing, simply because Mira Grant is a natural story-teller. (I had a similar experience with her previous novel Feed: zombies aren’t my thing, but that book just grabbed me and didn’t let go until the end.)

But then, at just about the midway point of the novel, I encountered not one but two plot developments that were just so utterly ridiculous that I ended up giving up on Parasite. To avoid spoilers, I don’t want to go into too much detail here, but I’m referring to the two big revelations that happen in chapter 11, one towards the beginning and especially the one at the very end. I was literally blinking in disbelief at my e-reader for a few minutes, unable to process that a story that had been fairly entertaining so far could go so horribly wrong in the space of one chapter.

I soldiered on for one more chapter, only to discover that it was at this point that the author decided to switch over from smooth prose and realistic dialogue to, well, characters exchanging paragraph-length science lectures. The novel just jack-knifes, switching from an entertaining and well-paced story to large chunks of exposition that (sort of) explain the utterly batty revelations in the previous chapter.

And so, at the end of Chapter 12 and 56% into my electronic review copy, I gave up on Parasite, reasoning that I’d be unlikely to enjoy the rest of it, let alone read another novel—Parasite being, as I understand it, the first novel in a duology.

Seanan McGuire/Mira Grant is an amazing, multiple-award-winning author. I loved Feed, one of the few books that actually reduced me to tears during one scene I’ll never, ever forget. I believe Parasite may become a commercial success. Niall Alexander, a reviewer I respect, seems to like it a lot—I encourage you to check out his review for a contrasting opinion. I’m sure many people will share his opinion, but as for mine: despite a strong start, Parasite went off the rails so spectacularly about halfway through that I just couldn’t bring myself to keep reading.

This entry was posted in Reviews, Science Fiction and tagged Mira Grant, Orbit. Bookmark the permalink.

14 Responses to Parasite by Mira Grant