The Cormorant by Chuck Wendig 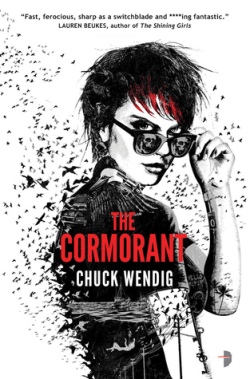 The Cormorant is the third installment in Chuck Wendig’s Miriam Black series, after the excellent Blackbirds (my review) and equally excellent Mockingbird (my review). And, you know what, just to get it out of the way before we get to the meat of the matter: The Cormorant is excellent too.

I called Mockingbird a “shocking, twisting beast of a book,” and that description applies here again. The Cormorant is prime Wendig, dark and foul-mouthed and not afraid to go there and then some. If you liked Blackbirds and Mockingbird, there’s no way you wouldn’t like this one.

The Cormorant starts in a similar way as Mockingbirds: with the illusion of stability. At the start of the previous novel, Miriam had a job, of sorts, until the crazy caught up with her and things went haywire, before you even got the chance to settle into the novel and get used to the idea of Miriam Black punching in at work.

Now, about a year after the events of Mockingbird, Miriam (who at one point describes herself as a “supremely vulgar human being”) actually has a stable residence. Well, at least she’s been living in the same place for about a year, with the same two roommates. She’s bringing in a little bit of money by pretending to be a worse psychic than she really is, using her gift/curse to tell people, well, not how they’re really going to die, but at least something about their future, usually a rosier picture than whatever she really saw. At $10 a pop, it’s been enough to keep things going.

So far, so good. But then, before you can really get used to the idea, things go haywire again. The ghosts of Miriam’s past haunt her, leading to occasional fits of random screaming and crying. After the most recent three day episode of howling and clawing the walls, Miriam’s roommates inform her that it’s time to move on. One of them does to try to help her out by showing her a Craigslist ad: some guy in Florida is offering her $5000 if she can tell him how he dies.

Before you know it, we’re back to familiar Miriam, Miriam the foul-mouthed, hard-drinking, chain-smoking, heroin chic road warrior, the self-styled “psychic assassin battling fate” who is making her way down to Florida. The plot really kicks off when Miriam reaches her destination, with a scene that’s so spectacularly psycho-dark that I literally had to put the book down and walk away for a moment. No spoilers here, but you’ll know it when you read it.

As a matter of fact, The Cormorant really feels like the book where Chuck Wendig decided to out-do himself. There’s something Tarantino-esque about the way he hunts down the extremes of darkness and violence and then kicks them just a little bit further down the road to blood-red insanity. It’s as if he was turning up the “Crazy” button, discovered it went all the way to 11, and then the button came off and it just kept escalating until, well, until the book was done. It’s a spectacular ride, but not for the faint of heart, that’s for sure.

The odd thing about this novel is that despite all the blood and cynicism and darkness, it’s a fun read. It’s once again a short book, something you can read in an afternoon. It’s full of dark humor and snappy scenes and perfect, unforgettable little descriptions like this one:

He strolls up, walking less like a person and more like a self-propelled collection of dirty rubber bands.

That woman has always been a dark little sparrow on stumpy legs—a human gallstone, a bitter apple seed, a black cancer shadow on a CT scan.

He’s got the muscle tone of a crumpled jerkoff tissue.

The whole novel is a string of short scenes ramming the story forward, with the same momentum as a series of punches. It doesn’t slow down. It doesn’t let up. Yes, there is horror, and there is emotion, both in unexpected places and often oddly connected, but the pauses for reflection are few and far between.

Even a brief description of the beach-and-sun Florida Keys gets derailed quickly when Miriam describes the “palm trees that shed bark the way a leper sheds skin.” And anyway, beach and sun be damned, Miriam inevitably ends up in a scummy motel or a rundown trailer park anyway. (At one point, it “occurs to her that she can’t seem to get away from trailer parks. She gravitates toward them like flies to garbage.”)

So. The only criticism I could level at this novel is that it’s a bit “third verse, same as the first.” By now you know Miriam, you know the deal, you know what to expect. However, if, like me, you loved that first verse so much that you drew crazy looks from other drivers because you were singing along in your car at the top of your lungs and air-drumming like a monkey on meth, well, get ready for another dose.

Chuck Wendig dedicates The Cormorant to “all the foul-mouthed miscreants and deviants who are fans of Miriam.” Well, yes. Guilty as charged, I guess, and proud to be. Wendig has once again hit the sweet spot right between disturbing and entertaining. Maybe there shouldn’t be a sweet spot there, but whatever—he makes it work. If you’re a fan of the series, don’t miss The Cormorant.

This review was originally published at Tor.com on January 2nd, 2013.

This entry was posted in Fantasy, Reviews and tagged Angry Robot, Chuck Wendig. Bookmark the permalink.

1 Response to The Cormorant by Chuck Wendig