Guest post by L.E. Modesitt Jr.: The Challenges and Benefits of a Long Series 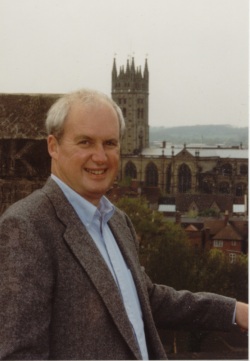 For today’s guest post, I’m very proud and happy to welcome L.E. Modesitt Jr., the author of over 60 (!) fantasy and science fiction novels, including his bestselling Saga of Recluce. I’ve been a life-long fan of Mr. Modesitt – as a matter of fact, I believe I have read more novels by him than any other author with the exception of Terry Pratchett and, possibly, C.J. Cherryh.

The latest Recluce novel, Cyador’s Heirs, is out today from Tor:

Decades after the fall of Cyador, its survivors have reestablished themselves in Cigoerne, a fertile country coveted by hostile neighbors in less hospitable lands. Young Lerial, the second son of Duke Kiedron, lives in the shadow of his older brother Lephi, the heir to their father’s realm. Lerial’s future seems preordained: He will one day command his brother’s forces in defense of Cigoerne, serving at his older sibling’s pleasure, and no more.

But when Lerial is sent abroad to be fostered by Major Altyrn to learn the skills and wisdom he will need to fulfill his future duties, he begins a journey into a much larger world that brings out his true potential. Lerial has talents that few, as yet, suspect: He is one of those rare beings who can harness both Order and Chaos, the competing natural forces that shape the world and define the magic that exists within it. And as war finally engulfs the fringes of Cigoerne, Lerial’s growing mastery of Order and Chaos is tested to its limits, and his own.

To celebrate the release of the seventeenth Recluce novel, Cyador’s Heirs, here’s a guest post by Mr. Modesitt about the challenges and benefits of long series – a topic he is certainly an expert on!

The Challenges and Benefits of a Long Series

The Saga of Recluce currently consists of sixteen books, soon to be seventeen with the publication of Cyador’s Heirs in May, and eighteen when Heritage of Cyador is published next November. The books cover a time span of almost 2,000 years with events in the novels set on five different continents and in more than a dozen different countries. There are no more than two books about any one set of main characters, although in a few cases lesser characters may appear as main characters in other books. In a way, the Recluce Saga is almost the novelized epic history of a world, but one told only through the lives of the characters, beginning with the rise and then the fall of a great empire – Cyador – followed by the rise and fall of other lands, through which history the use of the magic provided by the forces of order and chaos underlies the economic and political power of various lands.

In continuing such a massive undertaking, I’ve had to face the challenge of how to keep it fresh and interesting for both for the readers and for me. As long-time readers know, one of the initial decisions I made was NOT to equate order with good or chaos with evil. Order and chaos are merely forces, although, because of their differing natures, it is somewhat easier for an order user to be good, rather than evil, and also somewhat easier for a chaos user to slip into practices which result in the abuse of power.

Another technique I have used is to write the novels with differing tenses and from different viewpoints, but always with a close focus on the main characters and their personal feelings and ambitions, which are often much different from what is required of them. There are books in the Recluce Saga written from the first person past tense, third person past tense, and third person present tense. For whatever reason, the books told from the third person present tense tend to be either the most favorite or least favorite books of readers, at least from the feedback I’ve received. Such tense and viewpoint variation isn’t just an exercise of variety for the sake of variety, but also serves a more basic need, that of matching the presentation to the character and the story. Third person present tense locks the story very tightly to the main character and the events impacting him or her. Such an intense focus isn’t suited to all characters or stories. Likewise, use of first person provides greater and less intrusive insight into motivations, which is particularly good for clueless but intelligent characters. For example, telling the story of Lerris – the protagonist of The Magic of Recluce – from the traditional third-person past tense would leave most readers hating him in less than a chapter (and some do, anyway), but the use of first person can show how he changes without him even being aware of how much he has matured. Another use of a given point of view and tense is a form of continuity. All the novels dealing with Cyador and its heirs are told from the third person present tense.

One of the great benefits to writing a series like the Saga of Recluce is the ability to weave past and present together, and to show how certain events led to a given time, and how perceptions change… or even how each side in a war can have both villains and noble heroes and lofty motivations. One three-book subseries takes the events surrounding the conquest of the land of Suthya in Candar by the white wizards of Fairhaven and shows the same events from each side, first from the side of the blacks in The Magic Engineer and then from the side of the whites in The White Order and Colors of Chaos.

In a series with this sort of scope, as an author, I also don’t feel constrained or required to write the books in a straight chronological order, and that allows me the space and time to determine which stories I’m ready to tell and when, although at times there is the challenge of making certain that they’re not only consistent with the overall sweep of history, but that the novel furthers that history while still being interesting and exciting in and of itself.

The immediately forthcoming book, Cyador’s Heirs, adds another historical chapter in showing the attempts of the surviving descendants of the imperial family of Cyador to re-establish themselves as a power in Hamor, some thirty years after the destruction of Cyador and some twenty years after the end of Arms Commander. In previous books, where the events in those books take place chronologically after Cyador’s Heirs and Heritage of Cyador, there are hints and references to the survivors, merely as cultural and historical references made in passing, but not even a brief description of what happened. In essence, what I’ve attempted is to create a massive historical jigsaw puzzle, with each book adding more pieces to the emerging picture of a long and rich history… and each book presenting another challenge… and, hopefully, a greater reward for readers.

This entry was posted in Guest post and tagged L.E. Modesitt Jr., Tor. Bookmark the permalink.

5 Responses to Guest post by L.E. Modesitt Jr.: The Challenges and Benefits of a Long Series