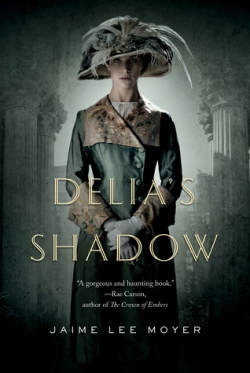 For this week’s guest post, I’m very happy to welcome Jaime Lee Moyer, author of Delia’s Shadow (now out in paperback!) and A Barricade in Hell (due out on June 3rd).

Jaime Lee Moyer lives in San Antonio, land of cactus, cowboys, and rhinestones. She writes books about murder, betrayal, friendship, magic, and kissing. Her cats approve of all of this, including the kissing.

Her first novel, Delia’s Shadow, was published by Tor Books on September 17, 2013. The second Gabe and Delia book, A Barricade in Hell, comes out June 3, 2014 and Against a Brightening Sky, will be published in 2015.

She writes a lot. She reads as much as she can.

Please enjoy this moving guest post about the origins of the author’s fascination with the Great War. And… at the end of this article, you can enter a giveaway to win copies of both novels! (US/CA only)

I was nine, maybe ten years old, when I pulled an over-sized photo book off the shelf at a friend’s house. What I’d found was a pictorial history of WWI—aka The Great War—written and published in 1918 after peace was declared. The book, with its photographs of trenches full of dead soldiers, and bodies lying in the hell of no man’s land between the front lines, didn’t pull any punches. I was horrified and fascinated both.

That all the photographs were in black and white is probably the only thing that saved me from nightmares. It was a pretty brutal introduction to the horrors of war. Without question, the wholesale slaughter of The Great War gave a new definition to horror.

Those images, and that war, have haunted me ever since. Things that haunt writers tend to find their way into books in one form or another. 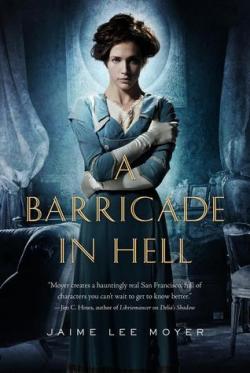 The story in A Barricade In Hell takes place in 1917, only a few months before the U.S. entered the war. It was an uncertain time, with debate raging over whether America should become involved in “the European conflict” or remain neutral. That uncertainty, and the war itself, was a shadow that loomed large over everything, including my characters.

I had to make the choice while writing Barricade to either make historical events the focus or to have my characters live their lives against the backdrop of history. That was a pretty easy decision. I’m not writing history books; I’m writing books about people who happen to live in the past. Their lives needed to be the focus.

That didn’t mean I could ignore the war, or that looming shadow I mentioned earlier. Weaving glimpses of the impact of WWI on my character’s lives without making A Barricade In Hell bleak, hopeless, and endlessly dark was a challenge. I wanted to keep the good-natured teasing between Gabe and Delia, Dora, Jack and Sadie, the friendship and the affection, without romanticizing the war.

I tried for balance, but that doesn’t mean my characters emerged untouched or unscarred, or less innocent than when they started. Few people alive during WWI escaped untouched by the war.

The Great War was the first modern war, and the first truly global conflict. Many historians have characterized WWI as the death knell of the 19th century, the end of the age of empires and the end of innocence. The modernization of war allowed armies to kill each other more efficiently and in far greater numbers.

Thousands of men from every nation in Europe enlisted to fight, thinking they were going off to wage an old-fashioned gentleman’s war, doing battle for King and country, honor and glory. Americans who believed the U.S. should step up and help our allies did the same thing, fighting on the side of England, Belgium, and France.

What these young men found instead was a hell of mud-filled trenches populated by rats the size of cats—rats that ate the dead comrades they couldn’t bury. Barbed wire tangles between the front line trenches, impossible to see in the dark, trapped men sent out to scout enemy forces. Those men took days to die. Artillery shells full of poison gas landed in the trenches and exploded. The soldiers had nowhere to run.

No one could advance, and the powers that be, miles from the front lines and death, refused to retreat. Trench warfare became a stalemate between the opposing armies that lasted for years.

Tens of thousands, if not hundreds of thousands, more young men left the trenches with their minds shattered, overwhelmed by the horror of an experience they couldn’t comprehend. We might call it PTSD. In 1917 they called it shell shock.

People now, a hundred years later, frequently characterize those years as a time of hope and courage, a noble struggle by brave men. Part of that is filtered through the rose-colored glasses of time and distance, a bigger part is that it’s easier to romanticize tragedy than think about the causes.

I can’t think of The Great War that way. I never have.

Many thanks to Jaime Lee Moyer for this wonderful guest post. You can find excerpts from Delia’s Shadow and A Barricade in Hell at Tor.com here and here.

And now for the giveaway! Thanks to the kind people at Tor, I have copies of Delia’s Shadow and A Barricade in Hell to give away to one lucky reader. At the request of the publisher, this giveaway is open to residents of the US and Canada only.

To enter this giveaway, simply send an email with subject line “SHADOW” to fbrgiveaway AT gmail DOT com with your full name and mailing address. One entry per person, please: multiple entries will result in immediate disqualification, but please feel free to tell your friends! Please note again that, at the publisher’s request, this giveaway is limited to the US and Canada only.

The giveaway will end on Sunday, June 1st at 11:59 PM, and I’ll announce the winners the following day. Void where prohibited by law, rules are subject to change, batteries not included, and of course, harmful when swallowed.