The Just City by Jo Walton 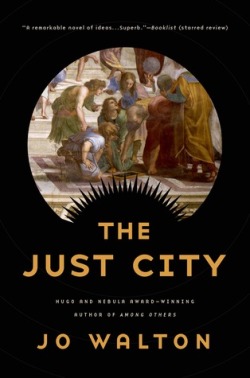 In Jo Walton’s newest novel The Just City, the goddess Pallas Athena uses her divine powers to create an approximation of Plato’s Republic. As in, she literally sets up a mini-version of the ideal state as described in The Republic, transferring over 10,000 children and a few hundred adults to a Mediterranean island in the past, giving them The Republic as a general operating manual (as well as some handy robots from the future) and basically directing them to set up the Just City, where every soul is free to strive for excellence. The end result is something like a planned community with divine guidance.

First up is Simmea, an Egyptian farm girl born some time in the first millennium AD, sold into slavery, and then rescued by Pallas Athena’s scouting team to become one of the 10,000 young citizens of the Just City.

Second is Maia, a young Victorian woman whose thirst for bookish knowledge is not considered becoming for a lady. Praying to Pallas Athena in an unguarded moment, she suddenly finds herself transported to the Just City to become part of the group of adults who design and direct life for its 10,000 child-citizens.

And third is Apollo, as in the god Apollo (and Athena’s brother), who has arranged to step down from Olympos to lead a full mortal life span and learn what there is to learn this way. Incognito, he becomes one of the children living in the Just City.

At this point you probably will know whether The Just City is a novel you want to read or not. If you’re like me, the entire concept of this novel will have you hopping up and down with eagerness to read it read it read it NOW. If, on the other hand, you don’t have much of an interest in philosophy and/or ancient history, you may not have quite the same level of enthusiasm. And if you’re on the fence, read on for some more hints on what to expect.

The central themes for this novel, the ideas around which the entire concept is built, are volition and equal significance. Jo Walton drives this home right from the opening chapter, in which Apollo is pursuing the common divine pastime of chasing down a pretty nymph in order to have sex with her. In this case (as in many others throughout the history of this godly hobby) the nymph in question did not consent to being taken and prays to Artemis for rescue. Artemis turns her into a tree, leaving Apollo utterly baffled.

The resulting discussion between Apollo and his sister Athena ends with his decision to lead out a full mortal life span, incognito and without godly powers, in order to see what life’s like for those of us who can’t turn themselves into animals or generally bend reality and other people to their wills.

Once Apollo, Simmea and Maia get to the Just City, there’s a large amount of detail about how the city should be best structured to conform to Plato’s ideas but still be a working community. Let me repeat: a large amount of detail. Ongoing Socratic dialogues about leadership and schedules and building structures. There are committees and disagreements and compromises. Everything is discussed and analyzed. There are sections of this novel that feel like the literary version of playing a fictional “The Republic” scenario in SimCity.

That’s not to say that there isn’t personal interaction and humor and drama and, you know, feelings. It’s a human story with characters that are easy to connect with. I found it hard to put this novel down and tore through in less than a day. Still, I’m sure some readers will be frustrated by the fact that there are very large chunks of this novel that are essentially explorations of the ideas behind Plato’s Republic. There’s little to no action, and instead there’s a lovingly detailed look at the lives of the people Athena has placed in this divinely planned community.

And that brings us back to the themes of volition and equal significance. The Just City is one big meditation on the nature of power, how to exercise it, and how it affects people on different levels of the power scale. Examples of this abound throughout the novel. Apollo attempts to rape a nymph at the start of the novel. One of Maia’s fellow scholar-teachers rapes her but justifies it by saying she really wanted it. The 10,000 children are essentially part of a huge, structured breeding program to create the next generation of philosopher-kings. (Not to mention that very many of those 10,000 “rescued” slaves were probably enslaved in the first place because Athena’s little project suddenly created a huge demand for 10 year old slaves.) Jo Walton starts exploring this idea at as high a level as divinity (with Apollo offering thoughts on how the Greek pantheon fits in with other religions and explaining there are different circles of gods, with the Almighty Zeus controlling even the gods) and takes it all the way down to the “workers”, who are essentially robots and (surprise!) turn out to have minds of their own too.

Some reviews have pointed out Walton uses sexual violence to illustrate this point too often. While I’m usually the first to complain about rape as a cheap plot driver, in this case I believe that this criticism is completely missing the point. Rape is what drives Apollo to step outside of his bias and privilege (yes, this novel features a god learning about privilege – how awesome is that?), and it obviously affects both Maia and Simmea. These experiences are like markers Jo Walton lays out to lead the reader to think about the broader issue of control and volition and consensuality, all the way up and down the power scale.

What’s most wonderful about The Just City is that, despite all this deep, thinky material, it’s just so much pure fun. (Well, as long as your idea of fun includes things like Sokrates running philosophical circles around his dialogue/debate opponents or Cicero being portrayed as a grumpy old man.) I particularly loved how Jo Walton uses some of the better ideas of the late, great Kage Baker’s Company series, with concepts like the historical event shadow and rescuing real children by pulling them out of history. (It’s hard not to think of the way Mendoza was rescued during the initial scenes with Simmea.)

The Just City by Jo Walton is an incredibly fun and thoughtful novel, a book that just sparks with original ideas. I haven’t even touched on half of the roads this one led me down. I could probably write another 1,000 words pointing out all the ways The Just City is the perfect counterpoint to Dan Simmons’ Ilium. If I had a copy of the sequel The Philosopher Kings (due out in June), that’s what I would be reading right now. Highly recommended.

4 Responses to The Just City by Jo Walton

Leave a Reply to Two Dudes in an Attic Cancel reply