Posted on February 4, 2015 by Stefan (Far Beyond Reality) 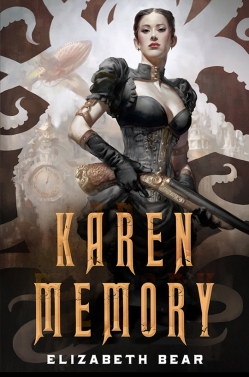 It’s bad form to start a review with a quote, but in this case I’m going to do it anyway, simply because it’s the best way to give you an idea of how wonderful  Elizabeth Bear’s newest novel Karen Memory really is. Here are the novel’s first two paragraphs:

You ain’t gonna like what I have to tell you, but I’m gonna tell you anyway. See, my name is Karen Memery, like “memory” only spelt with an e, and I’m one of the girls what works in the Hôtel Mon Cherie on Amity Street. “Hôtel” has a little hat over the o like that. It’s French, so Beatrice tells me.

Some call it the Cherry Hotel. But most just say it’s Madame Damnable’s Sewing Circle and have done. So I guess that makes me a seamstress, just like Beatrice and Miss Francina and Pollywog and Effie and all the other girls. I pay my sewing machine tax to the city, which is fifty dollar a week, and they don’t care if your sewing machine’s got a foot treadle, if you take my meaning.

Right from the start, the reader gets a perfectly representative sample of the whole: yes, the narrator is a young, female prostitute with a strong independent streak. She’s a bit ornery, she’s matter-of-fact about her situation, and, all in all, not unhappy about it.

Karen and the other women in Hôtel Mon Cherie work in clean and pleasant conditions, are able to save up their earnings, and “nobody’s going to make us do anything we really don’t want to unless it’s by paying us so much we’ll consider it in spite of.” Madame Damnable runs a tight, clean ship, especially when compared to the cheap cribs by the piers, where Chinese and Indian girls are forced into the same work against their will and under much more horrible conditions.

Those two very different approaches to the same business inevitably lead to tensions. The novel’s plot really takes off when a badly injured girl arrives at Madame Damnable’s doorstep, soon followed by Peter Bantle, the sex slave trafficker/pimp who holds her indenture and who appears to have a machine that temporarily lets him control other people’s minds.

The meat of the novel covers the ensuing confrontation between Madame Damnable and Peter Bantle, each supported by a fascinating set of side-characters including several of Karen’s colleagues as well as her beloved Priya, who I’d like to read an entire other novel about.

There are political machinations and street battles. There are automata that are referred to as sewing machines but that are really insane steampunk battle-exoskeletons. There are some real historical characters sprinkled into the mix of mostly fictional ones, maybe most importantly a wonderful portrayal of U.S. Marshal Bass Reeves.

There’s also the novel’s grand setting, called Rapid City, a partly underground urban jungle that incorporates elements of Seattle, San Francisco and a few other places. It’s a slightly more civilized (or at least urbanized) version of the Wild West, overrun by all sorts of shady characters trying their luck during the Gold Rush. (This, combined with Karen’s straightforward narration, reminded me a little of Six-Gun Snow White (review) by Catherynne M. Valente. (The two are more different than alike, but I think it’s fair to say that, if you like one, you’ll probably like the other one too.)

Most importantly, Karen Memory, for all the grimness of its subject matter, brims with friendship and love and humor. This is a fantastic, fast-paced adventure that simply sparkles with wit and depth and compassion, all expertly narrated in Karen’s unique voice. I’m sure Elizabeth Bear’s many fans will already be all over this one, but if you’re new to the author, this is as good a place as any to get started. Highly recommended.

And… check back here in a few days for a giveaway AND a wonderful guest post by author Elizabeth Bear!

This entry was posted in Fantasy, Reviews and tagged Elizabeth Bear, Tor. Bookmark the permalink.