Signal To Noise by Silvia Moreno-Garcia 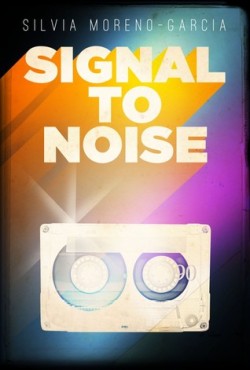 In Silvia Moreno-Garcia’s debut novel Signal to Noise, the 1980s are almost over, and Meche is a teenager in Mexico City doing all those random stupid teenager things we all did back then: listening to music all night, riding around on the back of friends’ motorcycles, and casting magic spells in dilapidated factories.

Meche’s dad is trying to make a living as a musician, which in practice works out to spending too much time in bars and not enough time with his family. Meche, already an unpopular girl who gets bullied, escapes into the music her dad introduces her to, and into her friendships with Sebastian and Daniela.

Then, when a bully pushes her too far, she discovers that there’s magic in music…

If I still had to choose titles for my reviews, the one for Signal to Noise would have to be “Mixtapes and Magic”, so please humor me as I quote my two favorite lines from the movie High Fidelity:

Now, the making of a good compilation tape is a very subtle art. Many do’s and don’ts. First of all you’re using someone else’s poetry to express how you feel. This is a delicate thing.

The making of a great compilation tape, like breaking up, is hard to do and takes ages longer than it might seem. You gotta kick off with a killer, to grab attention. Then you got to take it up a notch, but you don’t wanna blow your wad, so then you got to cool it off a notch. There are a lot of rules.

Signal To Noise combines magical realism with the kind of love for music that inspired so many people of my generation to spend hours with a record player and a tape deck, swapping out LPs and carefully picking song after song to make the perfect compilation tape. Meche discovers that certain songs have power, that power can be used for magic, and that magic can be used to fix some of the troubles in her life.

So begins a story that mixes (if you’ll indulge a few more movie references) The Craft with a dash of Pretty in Pink and the aforementioned High Fidelity: the struggles in the lives of teenagers with burgeoning magical powers, combined with lots of cool music references. Just to mention one example: the use of Siouxsie and the Banshees’ Candyman is nothing less than perfect and made me jump up and blast that song a few times.

What’s particularly wonderful about Signal to Noise is that all of the comparisons in the previous paragraph neglect to highlight a central aspect of its identity: this is a novel about Mexican kids living in Mexico City. It mentions Timbiriche and Los Fabulosos Cadillacs as well as Billy Idol and Joy Division. Silvia Moreno-Garcia, who writes in her bio she is “Mexican by birth and Canadian by inclination,” delivers a reading experience full of cultural references that are often sorely missing from the genre.

The novel gets an additional layer from a framing story set about 20 years later, when Meche returns to Mexico City on the occasion of her father’s death. Meche, now a successful young programmer living in Europe, returns to her hometown and looks back on the events of the main story during the traditional nine day mourning period for her dad. These sections of the novel add a certain wistfulness to the 80s story line, as well as an ongoing mystery: clearly there’s some unresolved business between her and her friend Sebastian.

Don’t be misled by my bad habit of comparing Things to Other Things: Signal to Noise by Silvia Moreno-Garcia is a unique and very welcome entry in the fantasy genre. I felt that there were some issues with pacing and prose, but that’s not unexpected for a debut. I’d love to see more novels like Signal to Noise.

Signal to Noise is out today from Solaris.

(Here are two playlists that include some of the songs mentioned in the novel, one by the author on Youtube and another very comprehensive one by a reader on cubic.fm. Very cool!)

This entry was posted in Fantasy, Reviews and tagged Silvia Moreno-Garcia, Solaris. Bookmark the permalink.

2 Responses to Signal To Noise by Silvia Moreno-Garcia