Hitchers by Will McIntosh 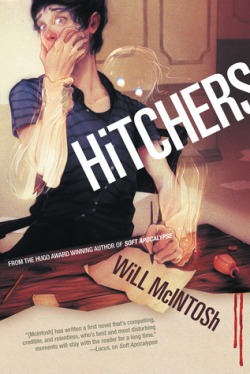 Will McIntosh’s debut Soft Apocalypse, which I reviewed here, was a brilliant novel about normal people trying to survive while society gradually collapses around them. It was easily one of my favorite novels of 2011. His catalog of strong short stories includes “Bridesicles,” which won the Hugo and was a Nebula finalist. It’s one of those rare stories where emotion and technology merge to form a perfect little SF universe. I can’t be the only reader who was eagerly awaiting this very exciting author’s second novel.

Well, it’s finally here, and it’s called Hitchers. People who are familiar with Will McIntosh’s debut will immediately notice that this is a completely different animal: a contemporary supernatural/horror novel rather than dystopian science fiction. Keep an open mind, because different as it is, it’s definitely worth your time.

In the wake of a terrorist attack in Atlanta that kills over half a million people, a few strange, disconcerting things begin to happen to cartoonist Finn Darby. After a car crash, he has a near-death experience during which he somehow finds himself trapped inside the head of a woman he recently was on a date with. Later, he starts to occasionally blurt out random sentences against his will, in a low, raspy, almost zombie-like voice. What’s more, it gradually becomes clear that he’s not the only person in Atlanta experiencing this. While the government tries to attribute the phenomenon to a mass psychological disorder brought on by the shock of the terrorist attack, Finn soon learns that the voices really belong to “hitchers”: dead people who are trying to re-enter the land of the living.

Finn is a strong, fascinating character. He’s a cartoonist who has recently taken over the long-running Toy Shop comic strip from his late grandfather Tom. He has revived the strip with a popular new character, resulting in public recognition, but on a personal level he feels guilty because his emotionally abusive grandfather never wanted Finn to continue Toy Shop after his death. Finn also struggles with guilt because of the recent death of his wife and, going back further in time, his twin sister, who drowned when they were children. In the present day, Finn lives in the defunct Toy Shop Village amusement park, trying to balance all this guilt with his recent success, when the Hitchers arrive to complicate matters even further… and force him to confront his personal demons.

A nifty aspect of this novel is the way Will McIntosh inserts some of Finn’s Toy Shop strips into the novel. These comics, drawn by Scott Brundage, initially seem like a gimmick but gradually begin to play a meaningful role in the story. It’s all part of the novel’s contemporary atmosphere, which includes lots of references to current popular culture, cable news channels, movies, recognizable locations in Atlanta, and so on. Hitchers genuinely feels like a story that could have happened just yesterday, if not for the massive terror attack and, well, the actual Hitchers. (And by the way, for people who are familiar with the author’s short story “Bridesicles”: that story also featured “Hitchers” but — even though this may come as a surprise and even be somewhat confusing — the two concepts are completely unrelated.)

From a story-telling perspective, Hitchers is a step forward for McIntosh. Where Soft Apocalypse consisted of vignettes, a series of chapters connected by the same main character but feeling somewhat fragmented because considerable amounts of time went by between each chapter, Hitchers is a much tighter, more coherent story. There’s also more depth to be found in the characters and their personal relations, with Finn in the center of a network of deeply uncomfortable familial and romantic bonds. There are one or two fairly predictable plot twists, but still, if you remove the genre elements from these two novels, Hitchers beats Soft Apocalypse because it flows better and has stronger characters, including main character Finn but also the washed up rock star Mick Mercury (who deals with his own demons and has a great side-story) and, to a lesser extent, the waitress Summer.

However, depending on your taste, Hitchers may feel like a letdown when you take only its genre elements in consideration, simply because the horror aspect, while very well done, feels somewhat familiar. When all is said and done, Hitchers is basically a ghost/possession story, featuring dead people who try to re-enter the land of the living. McIntosh’s vision of the afterlife is very creepy, with some excellent and terrifying scenes set in what the characters unfortunately end up referring to as “Deadland,” but all of it still feels like a variation on a familiar theme. The novel derives its strength from its strong characters and story-telling, not from the originality of its supernatural elements.

Hitchers really shines in the way McIntosh uses the horror plot to highlight the emotional trauma of its characters. It’s clear that Finn already carried his ghosts with him, but when they return it really lays bare the guilt that has prevented him from moving on. At just over 250 pages, Hitchers is a short, intense novel about the inevitability of confronting the past. Of McIntosh’s two novel-length works, Soft Apocalypse is my favorite, but that’s mainly because on my list of favorite sub-genres dystopian SF is high and horror fairly low. As long as you’re okay with a story that’s very different from the author’s debut, Hitchers is a great read — and one that really shows off Will McIntosh’s range as a writer.

This review was originally written for Tor.com, and published there on January 25th, 2012.

This entry was posted in Horror, Reviews and tagged Night Shade Books, Will McIntosh. Bookmark the permalink.

6 Responses to Hitchers by Will McIntosh