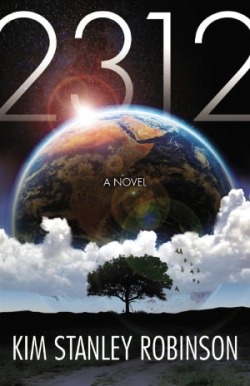 One of my favorite sections in Kim Stanley Robinson’s famous Mars trilogy (Red Mars, Green Mars and Blue Mars) occurs towards the end of the series, when the author briefly describes the development of other planets in the solar system. The way Robinson theorized the colony on Mercury always stuck with me: a city on rails, constantly moving to stay inside the sun-scorched planet’s tiny inhabitable zone. What a concept.

It was a pleasant surprise to discover that Robinson actually starts his new novel 2312 in Terminator, the moving city on Mercury, taking the concept from Blue Mars (and, I later discovered, from another novel and short story) and using it as a building block for what may be his most ambitious novel to date: a future history of the solar system, set exactly 300 years into our future. However, one thing should be explained right from the start: despite the similarity of the city on Mercury, 2312 is actually set in a completely different timeline from the Mars trilogy, one in which Mars took a different path. So: a standalone novel, not a sequel.

The scope of 2312 is so ambitious that the novel becomes hard to summarize. It’s one of those books that bears in itself the seeds for another handful of novels. (We can only hope that, in the future, Robinson will expand on the slew of fascinating concepts and settings he so casually uses here.) For now, think of 2312 as a novel that constantly shuttles back and forth between two poles. On the one hand, this is the highly personal story of its two main characters, Swan and Wahram. On the other, it’s a wide-ranging and imaginative future history of the next three centuries of the entire Solar System. In other words, 2312 tries to cover both macro- and micro-history. Occasionally the large amount of space between those two extremes makes the novel lose tension and slump a bit, especially in the middle section when Robinson occasionally seems more interested in showing the sights than in progressing the plot, but for the most part he manages to keep everything running smoothly and even takes advantage of the novel’s vast scale by zooming in for a few stunning, extended close-ups.

According to an interview I recently conducted with the author, the novel started out with the idea of describing the relationship between a mercurial character from Mercury and a saturnine character from Saturn, and that’s as good a way as any to describe one important aspect of this novel. Swan is an artist and former asteroid habitat designer from Terminator who gets involved in interplanetary politics when her grandmother Alex, an important figure in one of the Solar System’s many factions, passes away. During the investigation into the possible cause of Alex’s death, Swan meets Wahram, an unforgettable, toad-like intellectual and classical music aficionado from Titan with a gentle but gloomy disposition. The relationship between Swan and Wahram is a constantly evolving and intensely fascinating affair, book-ended by two long, unforgettable scenes in which the two characters are isolated from everyone else.

If 2312 only offered this particular duo and their interactions, it’d probably be a successful novel in itself, but Kim Stanley Robinson sets their relationship in an endlessly fascinating future version of our Solar System, in which several centers of powers strive for dominance. Robinson leaves no stone unturned, focusing on the political, economic and even psychological aspects of humanity as it spreads out across the system. It’s hard to pick out just one or two features of this complex fictional universe to describe, because there are so many dynamics here that affect the story, from the different approaches to profit-building to the ongoing speciation of the race as people adapt to their new planetary environments. The novel moves from spectacular futuristic settings on several planets and moons to terraformed asteroids and even our own overpopulated, politically fragmented and environmentally damaged Earth, which is still a powerhouse player in the system.

An important facet of this setting, and the third major pillar that supports the novel, is supplied by the “qubes”: artificial intelligences whose power has gone through the roof thanks to quantum processing. One of the novel’s central plotlines concerns the nature and future of these qubes, complicated by the fact that Swan has taken the controversial decision to implant her own qube inside her body. The qube plot line has its own quirks and intricacies, but was for me the weakest aspect of an otherwise stunning novel.

The combination of quantum-powered artificial intelligences, the prevalence of transhumanism (notably in the way gender is perceived), and a future economy that — outside of Earth itself — flirts with post-scarcity levels occasionally make 2312 feel like a smaller scale, incipient version of the future portrayed in Iain M. Banks Culture novels. It’s obviously an oversimplification, but in some ways this novel feels like the missing link between Robinson’s own relatively near-future Mars trilogy and far-future space societies like the Culture.

What may end up being the most controversial aspect of 2312 is Kim Stanley Robinson’s decision to write the novel using a collage method that incorporates several narrative modes: traditional storytelling chapters, faux non-fiction excerpts that describe planets or historical events, lists of ideas and synonyms, Joycean stream-of-consciousness sections, and a number of other fragments. Confusing as it may be initially, all of these sections work together to paint the overall picture of 2312. (According to the author, this methodology was inspired by John Dos Passos’ U.S.A. trilogy and John Brunner’s Stand on Zanzibar. Just finding parallels between these three works would make for a fascinating discussion.)

Even though the collage technique works more often than not, it does occasionally feel like a way for the author to sneak a multitude of info dumps into the novel without having to come up with a more streamlined way to integrate them, or a somewhat clunky way to set the scene for the following chapter by taking the exposition out of the story: we’re going to planet X now, so here’s a quick couple of pages about that planet. Take heed though: even though they break the flow of the story and sometimes feel a bit self-indulgent, those info dumps often introduce concepts that cross-pollinate and bounce off each other, generating some genuinely interesting ideas that end up playing an important role in the story later on. It’s not your average smoothly narrated story, but 2312 simply wouldn’t be the same if it had been written in a more linear style.

Regardless of the collage technique, make no mistake: as chaotic as the novel may seem, it’s a carefully constructed story full of surprising parallels and symmetries. Compare the events that open and close out the novel. Compare the scenes in which Swan and Wahram find themselves alone/together. Trace out the various arcs. Like an ancient orrery, 2312 has a lot of moving parts that may seem to swerve and interweave chaotically but, in the end, clearly follow a fixed path. It may be a stretch, but this seems like yet another way in which the novel attempts to fuse two opposing concepts.

Finally, tying it all together is Kim Stanley Robinson’s characteristically lovely prose. There are sections in this novel that beg to be read out loud and savored. There are instances where Robinson introduces concepts in such a playful way that you barely realize they work on several levels at once, images that are so strikingly original they’ll jump out of the page and stick with you for a long time to come. One of my favorites was a throwaway reference to migratory birds living in the cylindrical terraformed asteroids that play such a large role in the novel (there’s even a website where you can build your own):

To be out at dawn was important. The sunny point in the sunline cast shadows up the cylinder, and overhead flocks of birds flew from one lake to another. The migratory birds pretended to migrate, he was told; they took off at dawn and flew around for most of the day, then came back to where they had begun.

Read in the context of the novel, this idea works on more than a few levels, but it’s tossed into the mix so casually that it’s all too easy to miss. 2312 is full to the brim of moments like that, making it one of the most intellectually stimulating novels you’ll read all year, and one that almost has to be read more than once to be appreciated fully.

Admittedly, some of the concepts Kim Stanley Robinson explores in 2312 are nothing new. The dangers of evolving artificial intelligence; environmental collapse on Earth; the colonization of other planets; the tension between transhuman and regular people — sure, you’ve seen these done before, but this novel explores them on such a scale and with such enthusiasm and elegance that the end result is simply stunning. Remember that U2 song “Tryin’ to Throw Your Arms around the World” from Achtung Baby? 2312 feels like Kim Stanley Robinson trying to throw his arms around the solar system, bringing the intimately personal sphere into the system-wide one, and vice versa. The result is easily one of the best science fiction novels of the year so far: a challenging, sprawling, multi-layered story that will provide food for thought long after you turn the final page.

This review was originally published on Tor.com on May 22nd, 2012.

Further reading: You may be interested in my interview with Kim Stanley Robinson, which deals in large part with 2312.

8 Responses to 2312 by Kim Stanley Robinson