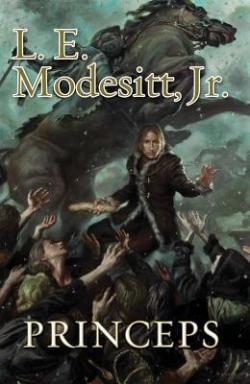 If you haven’t done so yet, you still have a few days left to enter my giveaway of Princeps by L.E. Modesitt Jr.! To whet your appetite, here’s my Tor.com review of the novel.

Princeps, the newest novel by L.E. Modesitt Jr., is the second installment in the second sub-series of the Imager Portfolio, which thus far includes a trilogy about the imager-portraiturist Rhennthyl (Imager, Imager’s Challenge and Imager’s Intrigue), and two novels about the scholar-imager Quaeryt (Scholar and Princeps), with a third novel entitled Imager’s Battalion scheduled for January 2013 and two more to follow further down the line. The Quaeryt books are set in the same fantasy universe as the Rhennthyl ones, but several hundred years earlier, in the time before Solidar was unified as a country. Depending on your perspective you could call Scholar and Princeps prequels, but fans of L.E. Modesitt Jr. will know that he regularly skips back and forth in the timelines for his various fantasy worlds (see also: The Saga of Recluce, The Corean Chronicles), so it’s more or less par for the course for him.

If you’d like a refresher on the earlier books in this excellent series, take a look at my post about the first Imager trilogy here (warning: it contains spoilers for the Rhennthyl books) and my review of the previous novel Scholar here. The rest of this review presumes you’ve read Scholar — in other words, it contains some plot spoilers about that novel.

When we last saw scholar (and secret imager) Quaeryt Rytersyn, he’d just prevented a potential disaster in the recently conquered province of Tilbor, where he’d been dispatched by the young Telaryn ruler Bhayar to investigate why that area of the country still needed such a large troop presence years after its conquest. Quaeryt proved himself surprisingly resourceful at handling less-than-honest officials and landowners with unsavory ambitions. By the end of the novel, Quaeryt is installed as Princeps of the province of Tilbor and married to Vaelora, the sister of Telaryn ruler Bhayar.

The early part of Princeps picks up shortly after the end of Scholar and deals with the aftermath of Quaeryt’s time in Tilbor and his day-to-day management of the regiment there, but the real meat of the novel starts when he is summoned to the city of Extela, which has just been devastated by a volcanic eruption. Quaeryt finds himself installed as the Governor of a city that’s partly in ruins and, as you’d expect from this character and this author, quickly finds himself in the center of a complex web of local intrigue.

This section of the novel is nothing less than excellent. The author quickly introduces a number of local characters in Extela and sets up several interlocking plot threads that help paint life in a city that’s recently been affected by a disaster. Quaeryt’s challenge is rebuilding the city and getting its basic services going again while also keeping everyone happy, because even as he tries to help the city recover from the disaster, some of its inhabitants are trying to extract personal gain from the situation. This confronts Quaeryt with the ethical dilemmas fans of the author will by now have come to expect.

Fantasy often features various cataclysms and disasters and frequently shows large scale destruction, but rarely shows the aftermath of such events for the local population and the way the area returns back to normal life. Large parts of Princeps do just that: what would be required to help a city recover from a natural disaster? L.E. Modesitt Jr. has Quaeryt essentially turn into a one man city manager/FEMA unit for Extela. It’s fascinating to watch him juggle the different needs of a recently destroyed city, including the economic, political and even spiritual ramifications. The level of detail and realism — as odd as it may sound to apply this word to a fantasy novel — is tremendous. Putting it in video game terms: the average fantasy novel often reads like an adventure or role-playing game (or possibly a first person shooter), but the average L.E. Modesitt Jr. novel frequently feels more like a grand strategy game that doesn’t shy away from focusing on even the most minute details and repercussions.

Quaeryt is a typical Modesitt protagonist: quietly powerful, cerebral but not afraid to take matters into his own hands when necessary. We learn more about his heritage and about the way the Pharsi are perceived in this age. We also see him in the early days of his arranged (but not involuntary) marriage to Vaelora, another typical L.E. Modesitt Jr. character. The dynamic between the two newlyweds is fascinating, especially the way the young couple deals with their difference in status. Maybe most importantly, we see Quaeryt further develop his imaging skills, which — unlike in the Rhennthyl novels — has to be done in secret, because in this part of the series’ timeline, imagers are often looked at much like witches were in our own not-so-distant past. People who were disappointed with the switch from Rhenn to Quaeryt as protagonist will probably feel differently after reading the new novel, because Quaeryt really comes into his own in Princeps.

Interestingly, the final section of the novel starts to show how a bridge from Quaeryt’s to Rhennthyl’s time may be built — something that made me very eager to read the next installment(s) in this series. L.E. Modesitt Jr. has always been a master at creating a real sense of history in his novels, often approaching periods and events from several perspectives. Princeps is another superb example of this, as readers who have read the earlier novels in the Imager Portfolio attentively will find some nuggets of information that point back to the events and characters portrayed in Scholar and Princeps.

If you’re a fan of L.E. Modesitt Jr., you’ll know what to expect from Princeps, and I doubt you’ll be disappointed. If you’re not familiar with the author’s work yet and daunted by the size of The Saga of Recluce, still his most famous and popular series, grab a copy of Imager, the opening volume in the Imager Portfolio. It’s quickly shaping up to be one of L.E. Modesitt Jr.’s best series.

This review was originally published on Tor.com on May 29th, 2012.

This entry was posted in Fantasy, Reviews and tagged L.E. Modesitt Jr., Tor. Bookmark the permalink.