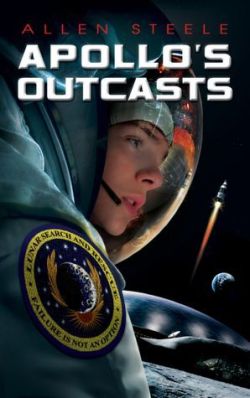 Jamey Barlowe was born on the Moon, but moved back to Earth as an infant following his mother’s tragic death. Because his fragile bones can’t handle Earth’s gravity, Jamey needs a wheelchair to get around, but he has learned to live with his disability and lead a normal teenage life. Then, on his sixteenth birthday, Jamey’s father wakes him up in the middle of the night and sends him back to the Moon to escape a military coup in the United States.

Jamey arrives in the lunar mining colony Apollo with five other refugees, including his kid sister and a young woman who seems to be more than she appears. At first it’s a challenge to start a new life in an unfamiliar environment, but thanks to the lower lunar gravity, Jamey can now walk independently for the first time in his life, so despite everything he flourishes and finds himself taking on new challenges. Meanwhile, tensions on Earth continue to rise, and the lunar colony soon becomes the world’s focus as the new U.S. President sets her sights on the Moon’s crucial He3 reserves…

Apollo’s Outcasts by Allen Steele is a charming Young Adult novel that should go down well with readers on the younger end of the YA scale as well as older science fiction fans in the mood for a nostalgic trip back to their own Golden Age of SF. Anyone who doesn’t fall in one of those two categories may end up disappointed because the novel’s plot and characterization are so straightforward and basic that it borders on the pedestrian, but for the right reader this book will be a blast.

Jamey is a great YA protagonist: a disabled teenager, woken up in the middle of the night and immediately cast in an unfamiliar situation. He narrates Apollo’s Outcasts in the first person, so it’s almost impossible not to empathize and, later, to cheer when he finds his bearings and discovers he can actually walk. (In his own words: “I didn’t know whether to laugh, cry, or join the nearest basketball team.”) His enthusiasm is infectious, and his willingness to make the best of a difficult situation and contribute to the greater good as he explores the lunar colony is admirable.

At the same time, there are a few aspects to his character that occasionally grate a bit. It quickly becomes clear that Jamey has more than a touch of Gary Stu in his DNA, for one. However, when it’s convenient for the plot, his usually sharp intellect seems to fail, e.g. when it comes to discovering the identity of the mysterious sixth refugee—something almost every character figures out immediately, as will most readers. He also ends up in the obligatory YA love triangle—yep, his best friend likes the girl he likes—while at the same time remaining stubbornly blind to the fact that his future true love is nearby and very much into him.

The supporting cast consists of characters who are, for the most part, either too faceless or too recognizable. Jamey’s younger sister goes through an all too predictable transformation as the story progresses, and the same goes for a bully who is introduced early on in the novel. Jamey’s best friend is a complete blank aside from making up one side in the aforementioned triangle. A cheerful pilot continues to pop up at improbable moments throughout the story to lend support. The villains are introduced early on and never achieve any depth.

Speaking of one of those villains: the name of the Vice President responsible for the coup in the United States is Lina Shapar. Even if that anagram isn’t obvious enough, Allen Steele makes it abundantly clear who he’s referring to: a former beauty queen from the more extreme wing of her party, who ran on the presidential ticket with an older, more moderate candidate. Surprisingly, there are many more political references in the novel, including thoughts about globalization versus sovereignty, scarcity of critical resources, and China as a rising superpower. I have absolutely no problem with politics in YA novels, but in Apollo’s Outcasts it simply feels out of place, maybe because this novel reads like it was geared towards a much younger audience than say, Cory Doctorow’s YA novels, in which the political message feels more natural and integrated.

Still, this is a minor problem compared to the novel’s characterization and plotting, which rarely rise above the level of a below-average light SF Hollywood movie. Because of this, it may be surprising to read that Apollo’s Outcasts is actually a fun read, as long as you’re okay with overlooking some of its problems and just letting yourself getting swept along by the adventure. It may be small-scale and a bit thin and predictable, but at the same time, Allen Steele is a talented storyteller who paces the novel expertly and often makes it very hard to stop reading, even when he takes the occasional detour to lovingly describe the lunar colony setting or explain the science behind the story.

Still, the biggest strength of this novel is its sheer innocence: from Jamey’s perspective, Steele writes convincingly about the adventure of going into low orbit and experiencing zero-g like it’s something brand new and exciting. Jaded SF fans may roll their eyes at this small-scale stuff, but if it catches you at the right moment, you may end up enjoying it and feeling more than little nostalgic. For a new or young SF reader, Apollo’s Outcasts will be a captivating adventure and possibly a great gateway into the genre. Older readers should probably approach it like one of Heinlein’s juveniles: sure, it may be easy to poke holes into it and point out its flaws, but if we’re being really honest… wasn’t reading SF more fun back when we were gobbling these books up as quickly as we could find them?

This review was originally published at Tor.com on November 7th, 2012.