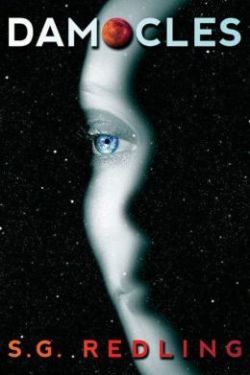 Damocles by S.G. Redling is a charming but flawed twist on first contact stories, the twist being that, in this case, the humans are the aliens who are landing on a faraway planet after a long period of cryogenic sleep. They are attempting to trace the origins of a mysterious message from an ancient race that claims to have originally seeded the Earth. Upon landing, the small human team discovers a humanoid race called the Dideto and becomes the subject of intense study.

Damocles switches back and forth between two points of view. Meg is the human team’s linguist and alien contact protocol specialist. Most of the novel describes her attempts to start and improve communication with Loul, a Dideto who originally posited the existence of alien life but was ostracized for it—until those aliens happened to land on the planet. Other members of the human team study other aspects of the planet and culture, but Meg and Loul are the focus of the story. All of the humans are contained in a small area, guarded by the local military and kept away from the public view, giving most of this novel an oddly claustrophobic atmosphere.

Didet, by the way, is similar to the planet depicted in Asimov’s Nightfall: it has seven suns and is in almost perpetual daylight. Of course, by incredible coincidence, the very rare multiple solar eclipse that leads to the planet’s nights happens in the short period the human team lands there. (You could possibly argue that Redling also references another SF classic, Rendezvous with Rama, as the Damocles’ main reason for pausing its journey between the stars is to refuel—again placing humanity in the role commonly filled by aliens in the story.)

Loul and Meg’s attempts at communication take up most of the novel. Meg uses a computer program to establish basic vocabulary, discover how to form interrogative sentences etc. Progress is sometimes painfully slow and is described in great detail. It’s not always the most thrilling material to read, but the author is very effective when showing the inherent difficulty of establishing effective communication between two species that are separated by so many factors. By the end, they’re still stuck at a level that barely approaches pidgin, and most of the actual success derives from the fact that Meg and Loul have become friends of sorts, or at least partners in reducing the tension between the two races.

Unfortunately, most characters never acquire much in the way of depth, aside from Loul and Meg, and even they are mostly there to illustrate the reverse first contact story. Oddly, S.G. Redling chooses to reveal two major chunks of back story (for Meg and her human colleague/love interest Cho) at the very end of the novel, after most of the action is finished. Both of these characters, but especially Cho, would have become much more interesting had that information been known earlier, but as it is, they remain a bit faceless throughout most of the novel. My favorite characters by far were part of Loul’s social circle, a tight and quirky group of friendly geeks. Unfortunately, we only get two brief looks at them because Loul is quarantined with the aliens at the landing site for most of the novel.

One of the most interesting aspects of Damocles involves the vague hints at the origins of the two humanoid races as mentioned in the original message received on Earth and shown in traces of legends on Didet. I would have enjoyed finding out more about this, but as it is, this side of the story is never fully explored. It’s possible Redling is planning to go back to this in future novels, because the door is certainly open for more stories set in this universe. For now, though, those hints at a much larger framing story have the unfortunate effect of reducing the impact of the events portrayed in Damocles, making them feel like an initial chapter rather than a complete story.

Ultimately, while Damocles is a decent novel, nothing about it stood out to me enough to make it worth recommending, unless you happen to be really desperate for a reverse first contact story. These concepts have been explored in much more depth and with much more skill in the past—in C.J. Cherryh’s Foreigner series, for example.

This entry was posted in Reviews, Science Fiction and tagged 47North, S.G. Redling. Bookmark the permalink.