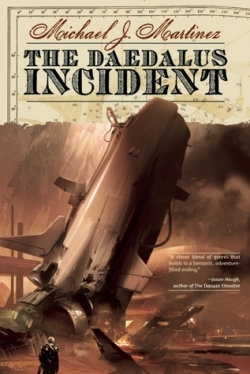 Before I get to the actual review, a brief side-note: the story of this book’s publication is interesting in itself. The Daedalus Incident was originally scheduled to be released a while back, but then the whole Night Shade Books situation happened, putting the novel’s future in limbo. Much has been written about this, but for the purposes of this review, the most important point is that the situation now appears to be resolved. The book’s already available in electronic formats, and I’m told that it’s scheduled to be the very first print release by the newly reconfigured Night Shade Books after its acquisition by Skyhorse Publishing and Start Publishing.

(Edit: Since this review was posted, author Michael J. Martinez was kind enough to write a guest post about this topic for Far Beyond Reality. You can read it here.)

So. I reviewed the novel for Tor.com a while back, based on an early electronic ARC I received from the author. This was one of those books that jumped out at me and just begged to be read and reviewed, and since I had trouble getting a copy from NSB (understandably, in retrospect), I ended up just contacting the author. I’m glad I did, because in addition to getting an early look at the novel, I also got the chance to chat with Michael J. Martinez and gain a valuable new perspective on the NSB situation.

When this review was originally published at Tor.com, the book’s future was still uncertain. I’m re-posting it today to help make people aware that The Daedalus Incident is now available in electronic formats and soon will be as an actual paper book. I’m also excited to offer a giveaway (EDIT: now concluded), and I’ll have a guest post by Michael J. Martinez appearing here in the next few weeks.

But first, after this long introduction, the review!

The Daedalus Incident by Michael J. Martinez offers two separate and wildly different storylines. The first one takes place in 2132, when a seemingly impossible earthquake on Mars sets off a chain of even stranger events. The second one is set in 1779 on the HMS Daedalus, which is just departing Portsmouth on a course set for Jupiter, where it will assist in the blockade of the Ganymedean city New York.

Guess which one of those two storylines drew my attention, when I saw a plot summary of this novel?

The Daedalus Incident is an interesting SF/fantasy hybrid. The 1779 section is incredibly bizarre and fascinating, starting off on what feels like a period-realistic ship of the British Navy in an alternate universe that shares its politics and economics with the end of our 18th Century but in which sailing vessels can navigate outer space and most planets and moons seem to have a breathable atmosphere. It feels a bit like Naomi Novik’s Temeraire novels, in which the Napoleonic Wars are changed completely by the addition of an Air Force comprised of dragons, but Michael J. Martinez takes the idea a lot farther.

The main character of this section of the novel is Lieutenant Weatherby, a newly-minted young officer in His Majesty’s forces. Most chapters begin and/or end with a section of Weatherby’s journals, which are odd texts to read because he considers sailing between the stars on an otherwise relatively period-authentic ship (give or take a few additions that allow them to move in three dimensions, much like the “windships” in Bradley Beaulieu’s Lays of Anuskaya trilogy) such a normal activity. Unfortunately I found Weatherby a bit bland as a character; for most of the 1779 section of the novel, I was much more intrigued by the setting than the characters.

The section set in 2132 is, oddly, more or less the opposite. The setting is a bit bland, especially when compared to the other one: a joint military/corporate-run mining base on Mars—a regular version of Mars, that is, set in our universe, sans breathable atmosphere and accessible only by good old-fashioned spaceships. There are no interplanetary sailing vessels or rebelling British colonies on Jovian moons. For all intents and purposes, it’s a fairly standard science fiction setting, at least until a seemingly impossible Martian earthquake sets off that part of the plot.

However, balancing things out, the characters in the 2132 section are much more interesting, especially Shaila Jain, a no-nonsense military officer who much like Weatherby finds herself confronted by unimaginable events but who, unlike her counterpart in 1779, doesn’t care much about convention and military hierarchy. She makes up for the blandness of the other plotline’s characters all by herself. The supporting cast in this section of the novel is, for the most part, a bit stronger too, although a few of them occasionally give off a David Weber-like standard military SF vibe.

As you’d expect, the two plots eventually do connect, but it takes until the midway point of the novel for that to happen. Until then, reading The Daedalus Incident feels very much like reading alternating chapters from two separate and very different novels—one a near future SF story in a fairly recognizable Martian setting, the other a bizarre version of Master and Commander in space. The sheer amount of contrast between the stories creates an interesting sort of tension for the reader: you simply want to know where all of this is going and how it’s going to connect.

It also helps that Michael J. Martinez manages to keep both plots moving along at a brisk pace. This is a fast-paced and smooth read from the very beginning, and towards the end Martinez builds up the suspense and urgency like a pro. The actual resolution may raise some eyebrows, and there’s some clunky dialogue here and there, especially in the 2132 section between Jain and her all-too-obvious future romantic interest Stephane, but aside from that it’s all smooth sailing, especially for a debut.

The Daedalus Incident is a true genre-bender. It mixes alchemy, quantum physics, and historical figures in ways you haven’t seen before. I’m not saying which historical figures, by the way, because discovering that is part of the fun, but let’s just say that some of them open the door for some potentially fascinating sequels. The Daedalus Incident isn’t perfect, but it’s adventurous, original, and a blast to read.

Thanks to Michael J. Martinez and Night Shade Books, I have one copy of The Daedalus Incident for a lucky reader in the US. Please note this book is actually not available yet, and as a result, the prize will probably take a few weeks to arrive. At the request of the author and publisher, this giveaway is open to US residents only.

To enter, simply send an email with subject line “DAEDALUS” to fbrgiveaway AT gmail DOT com with your full name and mailing address. One entry per person, please: multiple entries will result in immediate disqualification, but please feel free to tell your friends!

This giveaway will end on Wednesday, June 26th at 11:59 PM, and I’ll announce the winners the following day. Void where prohibited by law, rules are subject to change, harmful when swallowed, and of course, batteries not included.