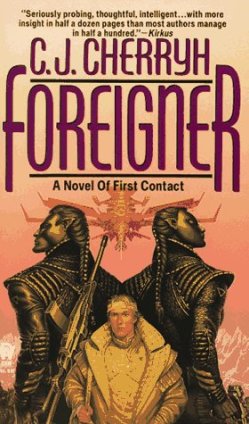 Foreigner is the opening volume of what has turned out to be C.J. Cherryh’s longest series. When I first read it, some time in the early 2000’s when the series only consisted of six books, I had no idea that this story would turn out to be five arcs of three books each, with the fifteenth novel due out in 2014 and the first book of a sixth arc reportedly in the works. That’s fifteen books going on sixteen, in case anyone else is in the mood for a nice meaty SF series.

My history with this series is a bit confused. I’ve read about three dozen of Cherryh’s novels; the only authors I’ve read more individual works by are Pratchett and, maybe, L.E. Modesitt Jr. For some reason, it’s been a few years since I picked up one of Cherryh’s books. I read the first six books in the Foreigner universe practically back to back, then for some reason completely lost track of the series for over a decade.

When I decided to indulge and pick up one of her older books (“indulge” because there were about twenty new books I should have been reading instead), I was tempted to go for book seven of the Foreigner series, but quickly realized that I just didn’t remember enough detail from the earlier books. So I decided to treat myself to a reread of those first six books. And that, dear reader, is the reason you’re seeing a review of a book that’s almost twenty years old on this blog today.

Foreigner is essentially a first contact story about aliens landing on a planet and having to learn to deal with its inhabitants. The big twist is that we’re the aliens. A human colony ship got lost in space after a bad hyperspace jump. The first two sections of Foreigner fast-forward through their journey, their arrival in the new system, the horrific challenges they face as they realize there is no way home. These two sections only account for about one seventh of the novel (about 60 of my paperback’s 420 or so pages) and should probably be considered something like a prologue to the entire series, because it’s only afterwards that the real story gets started.

As the third section of Foreigner begins, we meet Bren, the human paidhi who lives with the alien atevi. A combination of translator, observer, and diplomat, the paidhi position is an essential link between the two cultures and the only human allowed to leave the island where humanity has settled. About two hundred years have passed since the human/atevi war that created this delicate balance.

This third section starts, quite literally, with a bang, as Bren is forced to defend himself against an unknown assassin, using a gun he just received as a gift from Tabini, an important atevi leader whose association has benefited the most from contact and trade with the human colony. The assassination attempt sets off a confusing and complex set of events: who would dare to attack the paidhi, an important but essentially harmless human who lives under the roof and protection of probably the most powerful atevi?

It’s at this point that we should look at C.J. Cherryh’s writing style, in case you’re not familiar with her works, because Foreigner is one of its finest examples and almost impossible to understand and appreciate without considering it in that light.

Cherryh usually writes in an incredibly tight third person limited perspective. In Foreigner’s case (once the “Prologue” is over) we see everything from the point of view of Bren. Even though the prose is written in the third person and fairly structured, it’s essentially a “stream of consciousness” narration that shows Bren’s thought patterns as they occur and as they are affected by events around him. That has two immediate effects: Bren’s (and so ours) knowledge is limited by his often incomplete understanding of the situation, but, importantly in the context of this series, it also benefits from his unique cultural awareness.

As a result, Bren is both the best and worst possible narrator for this story if, as a neutral observer, you want to understand exactly why the atevi are in such an uproar. Worst because he just doesn’t know what set off the chain of events depicted in this book, until someone bothers to tell him towards the very end. He is clueless when it comes to the main driver of the plot of this novel. Partly because of this, he lacks any sort of agency until late in the book. He has no power to steer the narrative. He is physically weaker than the atevi. He is lost, off the grid, unable to contact any other human. And, to cap it all off, he just has no idea about what happened. (Note: see Ann Leckie’s reaction to this point elsewhere on this site.)

On the other hand, he’s also the best narrator possible for this story, because as paidhi, he has a more complete understanding of atevi psychology and society than any other human (and, obviously, vice versa). He’s devoted his life to understanding the atevi, who may look humanoid (though much taller and stronger) but have a completely alien mindset. Their emotions don’t work the same way. The way they perceive relationships and loyalty is entirely different.

Foreigner is essentially the story of a man who has devoted his life to trying to make sense of an alien culture and who now continues to do so during a pivotal time and under highly stressful circumstances. The crisis between the two cultures that is beginning to brew is mirrored in Bren’s own mind, as his mainly intellectual fascination suddenly turns into a life-or-death situation, forcing him to re-evaluate certain assumptions and habits that allowed him to function but also led to potentially costly misunderstandings.

There are only a few authors who could pull off a book like Foreigner. The level of nuance and detail in Cherryh’s prose is what makes it work, creating a slow, deliberate, multifaceted look at the thought processes of a character who doesn’t have the full picture but is trying to reason his way to it. There are paragraphs, pages even, of Bren trying to process recent events in light of the historical situation on the planet, his personal and professional relationships, and his own observations.

This creates a reading experience that’s the literary equivalent of shaky handheld camera footage accompanied by an internal monologue voice-over: yes, it’s sometimes slow, confusing, and obviously focusing on things that are less than important in the big picture. You’re forced to process raw footage, just like the point of view character. At the same time it makes for a uniquely immersive experience.

Steven Brust recently wrote a blog post entitled “Making the Reader Work”, including a quote from David Wohlreich (@wallrike): “When a fish explains what water is, I’m unhappy.” C.J. Cherryh is the kind of author who should make readers like this happy: in her fiction, not only does the fish rarely explain what water is, but often the reader isn’t even aware that there are such things as fish and water, or that there’s anything but water to consider.

(Interestingly, Cherryh has several works that are even more challenging and uncompromising in this regard: see, for example, the opening volume of her Fortress series, which for the first 100 pages or so borders on the incomprehensible because the author is ruthlessly consistent in limiting herself to the main character’s point of view.)

In Foreigner, Bren is (if you’ll pardon the pun) a fish out of water. The end result is a slow, often confusing but extremely rewarding novel. The limited perspective is sometimes difficult, yes, but it also allows Cherryh to introduce the many other aspects of this novel and series in a piecemeal fashion: culture shock, multiculturalism, colonial and post-colonial relations. The Foreigner series offers a broad socio-political tapestry, from the various factions on the human side to the complex structure and history of the atevi.

Unwrapping that “post-colonial relations” bit somewhat: the humans are in a unique position here, having more or less crash-landed in the middle of a Steam Age level-culture while carrying the knowledge of thousands of years of human science. They allow their advanced knowledge to trickle into atevi culture, constantly trying to balance progress (and profit) with preservation. One of the long term goals is steering the alien culture towards a space program. Some atevi are strongly opposed to any human influence on their society, while others are impatient for more advanced science. Humanity itself has all kinds of factions, including one that feels they shouldn’t have landed on the planet in the first place. There are many sides tugging in different directions, and again, the reader has to figure all of this out based on one character’s perspective.

If the book has one weakness, it’s that there isn’t any kind of resolution. If anything, you end up with more questions than answers. It’s best to consider Foreigner as part one of a three part novel and be ready to get to the next volume in the series. Cherryh does provide some closure at the end of each three book arc (or at least of the two arcs I’ve read so far), but that’s not really the point of this novel and series anyway.

Foreigner is one of the most in-depth, uncompromising examinations of the way cultures interact in science fiction. Rereading it after all this time and with the added benefit of having read some of the later books in the series, I discovered a whole new level of complexity that’s probably almost impossible to appreciate on a first reading—complexity on almost every level, from Bren’s personal life and the subtle interactions of the atevi characters on the micro-level to the incredible socio-political depth on the macro-level.

I’ve been reading mostly new releases for review purposes lately. Rereading Foreigner was a pleasure. I’d forgotten that C.J. Cherryh is simply one of the most unique minds working in SFF right now. I’m actually a bit annoyed that I let myself lose track of this author and series for so long, but fortunately, as I just learned, these books lend themselves to a second reading really well. I’m looking forward to reading through the next five books again and then treating myself to the other eight.

This entry was posted in Reviews, Science Fiction and tagged C.J. Cherryh, DAW. Bookmark the permalink.

28 Responses to Foreigner by C.J. Cherryh