Master of Whitestorm by Janny Wurts 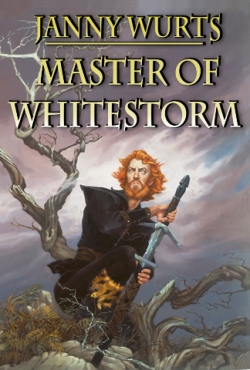 As Master of Whitestorm starts off, Haldeth, a blacksmith turned galley slave, gets involved in an escape attempt by his mysterious and silent bench mate—a man who quickly proves to have surprising skills and hidden depths. The two companions strike out together after their escape. The mysterious man, whose name is Korendir, takes on a number of mercenary missions. It quickly becomes clear that Korendir is, to put it mildly, very focused on gathering enough money to build an impregnable fortress on the cliffs of Whitestorm…

Master of Whitestorm, a standalone novel that has just been released in ebook format after being out of print for years, is an excellent example of Janny Wurts‘ gorgeous prose style and impressive storytelling skills. Initially an episodic story consisting of a number of separate “missions” Korendir undertakes, the novel gradually reveals an underlying thread that explains Korendir’s distinctive personality (think Lethal Weapon in a complex fantasy setting) and builds up to an impressive climax and a moving conclusion.

Like many other Janny Wurts novels, Master of Whitestorm is an intense and concisely told story that requires the reader’s full attention. In this age of bloated fantasy tomes that could easily lose entire chapters without losing much plot, I’ve found that I always have to recalibrate when starting out on a Janny Wurts novel, because here every word counts. Re-reading invariably reveals additional layers and details you may have missed on the first run-through—especially in this novel, which starts out as a number of seemingly disconnected episodes.

If the novel has one weakness, it’s that episodic structure of its first half: during my first reading, it felt a bit disjointed and lacking the narrative tension that I’d come to love and expect in the other Janny Wurts novels I’ve read. However, the second half of the novel ties everything together beautifully and will make you reconsider the earlier chapters—and Korendir—in an entirely different light.

In either case, this may be just a personal preference: other readers reported loving Korendir’s early missions because they had an old-fashioned “adventure fantasy” feeling to them—and don’t get me wrong, they are tremendously entertaining. Consider: Michael Moorcock‘s Elric novels start out explaining why Elric is such a tortured soul, which puts the rest of his stories in perspective because we already understand Elric; by contrast, Korendir’s background is only explained after reading a number of his adventures, so the reader is somewhat in the dark early on, but the later revelation is very powerful.

There’s much to admire in Master of Whitestorm: a large, varied, and original fantasy world (which could easily host more novels), a unique magic concept, a beautiful romance, and most importantly, the unique, driven character of Korendir. Simply put, this is another excellent standalone novel by Janny Wurts.

Master of Whitestorm was released in 1992 and is now finally available as an ebook. Buy it at Amazon, Barnes & Noble, or directly from the publisher. A slightly different version of this review was published on March 10th, 2010 at Fantasy Literature.

This entry was posted in Fantasy, Reviews and tagged Janny Wurts. Bookmark the permalink.

5 Responses to Master of Whitestorm by Janny Wurts