The Ape’s Wife and Other Stories by Caitlín R. Kiernan

Posted on December 4, 2013 by Stefan (Far Beyond Reality) 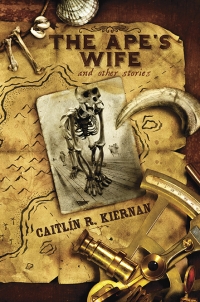 From the back cover of The Ape’s Wife and Other Stories by Caitlín R. Kiernan I learned that this is Kiernan’s twelfth collection of short stories since 2001. That’s about one collection per year. Even more impressive, in the book’s introduction the author mentions that she’s written (and sold) 107 stories and novellas since its title story was published in 2007. What an incredibly prolific author.

The Ape’s Wife and Other Stories contains fourteen great examples of Kiernan’s output since 2007. If, like me, you’ve mostly caught her stories here and there in the various markets they regularly get published, this is an excellent way to get a bigger chunk of her works. If you’re new to the author (which I doubt anyone who reads a good amount of short SFF would be, but hey, you never know), this is an excellent place to start.

Sidebar: I always feel there’s a huge benefit to reading a collection of stories by a single author, rather than finding the stories one by one in whichever anthology or magazine or other market they appear. Seen and read together, the stories reinforce each other, even in a non-themed collection like this one. They create a more accurate impression of the author’s style. The writer’s voice is allowed to resonate more fully. It’s like hearing an entire album by an artist, rather than a single song on a compilation or on the radio. Even if not all the stories are equally strong, collections like these provide a valuable reading experience because the stories amplify each other in ways you’d otherwise miss out on. (Not to mention that, without them, tracking all of these stories down separately would be one hell of a job.)

The stories included in The Ape’s Wife and Other Stories are, in order of appearance: “The Steam Dancer (1896)”, “The Maltese Unicorn”, “One Tree Hill (The World as Cataclysm)”, “The Collier’s Venus (1898)”, “Galápagos”, “Tall Bodies”, “As Red As Red”, “Hydraguros”, “Slouching Towards the House of Glass Coffins”, “Tidal Forces”, “The Sea Troll’s Daughter”, “Random Thoughts Before a Fatal Crash”, and the title story “The Ape’s Wife”. (For completion’s sake: apparently the limited edition includes an extra story, a companion novella actually, called “Black Helicopters”, but I didn’t have access to that for this review.) The collection also includes the aforementioned introduction and, more importantly, some fascinating notes about the background and genesis of each story. (For me, story notes in collections are like maps in epic fantasy: it just doesn’t feel right without it.)

I won’t try to write about each of those stories here, and instead will try to offer some notes about the ones that stood out to me. Which, as it turned out, ended up being very many of them.

The collection starts off strong (understatement alert) with “The Steam Dancer (1896)”, the story of Missouri Banks, a young woman with two prosthetic limbs, who lives in a small apartment with the mechanic who made her whole again—at least in the physical sense. Missouri proudly earns a living dancing at a brothel:

She thinks that she has grown to be a very beautiful woman, and sometimes she believes the parts she wasn’t born with have only served to make her that much more so and not any the less.

This is a stunning vignette, a brief glimpse into an intriguing life and world, full of gorgeous, quotable lines. It also includes a first for me in genre fiction: an instance of the word “lissome” that didn’t annoy me. Here’s how Kiernan describes Missouri’s dance:

She spins and sways and dips, as lissome and sure of herself as anything that was ever only born of Nature.

This is a lovely story, both sensual and disturbing, bleak and romantic, and I tend to agree with the author when she states in the story notes that it deserved an award.

“The Maltese Unicorn” is a fantastic, brash take on The Maltese Falcon, including the requisite dames with plenty of moxy and people getting slipped a Mickey, but also full of the supernatural and demons and demon sex and a weird, dark sense of humor I utterly adored. Its New-York-plus-supernatural setting read like a like a grown-up, twisted, and much more effective version of what I think Mur Lafferty was trying to do in The Shambling Guide to New York (my review), evoking, in just a few dozen pages, much more darkness and twisted sensuality and long-term perspective than that novel did.

“One Tree Hill (The World as Cataclysm)” is a contemporary supernatural story that feels like it could slip right into the New England horror/folk legend tradition, just like “As Red As Red”, a later story in the collection. These are haunting, subtle tales that, when seen against some of the others, present a deceptively recognizable atmosphere: you almost recognize these towns, or maybe you do, or think you do. The placement of “One Tree Hill” right after “The Maltese Unicorn” can’t be a coincidence either, with its sexual encounter that provides a poignant counterpoint to the one in the earlier story.

“The Colliers’ Venus” is a gorgeous tale set in a late 19th Century American mining town, showing a frightful discovery in the deepest depths of a mine. This story plays on the perception of time, limited for some, maybe slightly less limited for others. It presents a continuum, starting with a contrast between those who refuse to accept even the age of our planet and those who present the incontrovertible evidence thereof— before pushing the whole concept to a new scale altogether.

“Galápagos” explores a similar concept as several of the stories I’ve mentioned so far: the human brushing up against the divine, the natural meeting the supernatural, but for the first time in the book, “Galápagos” does this in a science fiction setting, which probably will make the story stand out immediately for people who are reading the stories in the order they’re presented in here. It’s composed of the journal entries of a woman who met the unknowable—journal entries she is directed to write by the psychiatrists who are trying to unravel the trauma she experienced during a pilgrimage-like experience in space. It’s a haunting story that ties many strands together: Heart of Darkness meets Darwin, colonial exploration and its effect on indigenous biology, all on the haunted slopes of a cold planet and an even colder bed in a psych ward.

“Hydraguros” is what Kiernan calls a “near future neo-noir” story about a young couple involved in a criminal transaction with wide-ranging consequences. It’s also a good example of another common pattern in several (but not all) of these stories: Kiernan’s protagonists are rarely straight, cis-gendered males. The author explores sexuality and gender from several angles and perspectives, and usually crosses the old hetero-normative boundaries for more than just diversity’s sake, making it an integral part of those stories. In “The Maltese Unicorn”, a sexual encounter is so much more than it originally seems, adding layers that almost get lost in the story’s brash 1930’s New York mannerisms. “Galapagos”, by contrast, explores gender in a way that’s almost tender—a delicate approach that makes the final revelation all the more visually (and viscerally) shocking.

Another unifying thread is Kiernan’s careful use of language, switching from lyrical verbosity to blunt incisiveness in the space of a paragraph, even a sentence. The prose occasionally lulls you into comfort, only to take a hair turn and drop a slash of emotion or a tiny, blinking revelation with echoing consequences into unexpected places. It makes for adventurous reading. “Slouching Towards the House of Glass Coffins” is probably the most creative story, language-wise, offering a tasty future patois that should go down easily for people who enjoyed A Clockwork Orange or, more recently (and even better, in my opinion), Kevin Barry’s City of Bohane.

“Glass Coffins” is also a great example of how disorienting this collection can be — in a good way, that is. From contemporary to fantasy to SF to steampunk, the first paragraphs of each story are often an adventure of finding your feet and seeing which direction Kiernan is heading this time. Many of the author’s previous collections are more consistent in this respect, more “themed” — whereas this book offers a wide range of the fantastic.

Case in point, “The Sea Troll’s Daughter”, which can’t be described more accurately than the author’s own summation in the notes: a feminist retelling of Beowulf. I wanted to stand up and cheer, reading this story. I wanted to print it out, roll it up, and use it to gently bop the heads of a few authors working in the increasingly mediocre subgenre known as grimdark. “The Sea Troll’s Daughter” is a standout story in an excellent collection. It simply made me happy. (I also agree, again, with the author, when she says this story deserved more attention than it got, and maybe an award.)

And then, finally, there’s the title story, the one that was voted the readers’ favorite over at Clarkesworld where it was originally published. “The Ape’s Wife” offers an alternate take on “King Kong” in a way that’s entirely different from the way “The Maltese Unicorn” is an alternate take on that other icon of early 30’s US cinema, “The Maltese Falcon”. I’d rather not spoil this one too much for you and let you “wander those treacherous, deceitful paths of Might-Have-Been” by yourself.

The Ape’s Wife and Other Stories by Caitlín R. Kiernan is a collection that, to be honest, intimated me somewhat, displaying such a richness of content and a mastery of technique that I felt a bit helpless trying to capture it in a review. Regardless, I hope my brief thoughts about these stories will offer you some motivation to check them out, and maybe some fodder for thought or discussion once you’ve read them. This is an excellent collection with a consistently recognizable authorial voice, giving it a strong sense of identity despite its wide variety of genres and narrative approaches. Highly recommended.

Note: I don’t know how long it’ll last, but it looks like this collection is only $4.99 in Kindle format at the moment. I encourage everyone to buy one of the two gorgeous Subterranean Press editions, because they make beautiful books, but if that’s outside of your price range right now, $4.99 is an amazing deal. You can buy the Sub Press editions directly from the publisher (and of course at Amazon), and the $4.99 Kindle one here.

1 Response to The Ape’s Wife and Other Stories by Caitlín R. Kiernan