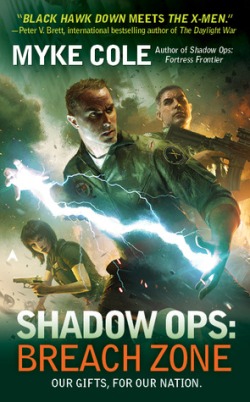 is the third entry in Myke Cole’s contemporary military fantasy series Shadow Ops, after series opener Control Point (my review) and last year’s Fortress Frontier (my review). “Contemporary military fantasy” is probably not the most evocative way to describe these books. Peter V. Brett’s blurb “Black Hawk Down Meets The X-Men” is much better—and the publisher seems to agree, as this line has now been featured prominently on the covers of all three books in the series.

You see, in the world of Shadow Ops, random people suddenly discover they have supernatural powers. Some can control fire, or water, or air. Some can control the dead or create portals between our dimension and the Source, a realm filled with alien creatures that also appears to be where all the magic actually originates from.

In the U.S., the government has put the military in charge of these new powers: because “magic is the new nuke”: people who discover they are “Latent” (have magical power) must report to the military or face persecution as “Selfers.” People who have the misfortune of manifesting one of the Prohibited schools of magic (necromancy etc.) are hunted down as “Probes” and usually never heard from again.

The result, so far, is a set of three excellent, action-packed novels that combine elements of contemporary magic and superhero fiction with the type of atmosphere genre readers usually only get in military SF. There’s so much military slang and terminology Cole includes a glossary, and you’ll end up knowing most main characters by rank and/or SOC call sign as well as by name. Imagine the X-Men recruited willy-nilly into the U.S. military and you’ll have a good idea of the direction and atmosphere of this series.

Important note: since this is the third installment in this series, it’ll be hard to avoid spoilers for the first two books in what follows. If you haven’t read the first two books yet, you may want to stop reading here and instead check out the reviews for Control Point and/or Fortress Frontier. In other words: spoilers ahead.

The reason for the spoiler warning, and also one of the main strengths of Breach Zone, is that this third novel brings the separate plot strands of the previous two books together. Control Point was (mainly) the story of Oscar Britton’s awakening, from motivated participant in the military/Latent system to fugitive to rebel. Fortress Frontier was (again mainly) the story of Bookbinder’s evolution from someone whose role in the military was primarily administrative to a “steely-eyed dealer of death” who, incidentally, also began to see the ugly side of the system towards the end of the second novel, when he found himself in charge of Forward Operating Base Frontier and abandoned to his fate. Woven through both was Scylla’s role as the Magneto of this fantasy universe, arguing for the complete overthrow of the system in favor of a new order with magic users on top.

Which brings us to the starting position of Breach Zone. In the wake of “Gate-Gate”, the world is now aware of the actions and policies of the U.S. with regards to Probes. As a result, the President has been impeached, and both Bookbinder and Harlequin have been promoted and put out to pasture, with Harlequin in the interesting position of being a hero to the public but a pariah to the government and military. Britton is still a rebel, hiding in the Source and biding his time. And Scylla, right in Chapter One of this novel, invades Lower Manhattan with an army of creatures from the Source.

I confess that I initially had trouble with this plot device: after all, the last two books repeatedly stressed the importance and rarity of Portamancers and how impossible it was to travel between planes. This was a fundamental building block of the previous two books: it made Britton unique and explained why Forward Operating Base Frontier was in so much trouble after being cut off. Now suddenly there’s a hand-wavy explanation of “thin spots” between the planes that Scylla can conveniently affect with her Negramancy to invade our realm.

However, if you think about it, all of this has been hinted at from the very beginning (see also: the Gahe in Mescalero), and anyway, once the invasion really begins, Breach Zone is such a tense and action-packed ride that it’s easy to forgive Cole for the somewhat convenient timing of Scylla’s discovery of this ability.

Did I say “tense and action-packed”? Why, yes. Breach Zone is full of desperate, back-against-the-wall combat scenes. Right from the start it feels like a “last stand” type of story, with the defenders dug into Lower Manhattan and doing everything they can to stop the inhuman hordes of goblins, rocs, Gahe and other assorted monsters from breaking through and taking over the city and the world. The few pauses for breath consist mainly of short flashbacks that, finally, tell the background story of Scylla. I won’t spoil it for you, but let’s just say that it’s surprising in many ways.

Another surprise are a few chapters from new point-of-view characters, including Swift, the former leader of the “No-No Crew,” and (cue the cheers) Sarah Downer, who really comes into her own in this novel with a few fantastic scenes and, going back to the very beginning, one of the most thrilling character arcs in the trilogy. Together with the background story for Scylla, this does a lot to alleviate the concerns about female characters I mentioned in my review of Fortress Frontier.

And finally, the word “trilogy” in the previous paragraph is maybe the biggest surprise about Breach Zone. As it turns out, Control Point, Fortress Frontier and Breach Zone form a trilogy, despite, as far as I know, never really having been marketed as such. (In this genre, it’s definitely rare not to see something like “the final book in the Shadow Ops trilogy!” splashed across the front cover.) Rest assured, there will be further novels set in this universe—the next one is apparently set earlier in the overall timeline—but, for now, Breach Zone wraps up this part of the story.

The way Myke Cole brings together the separate character arcs and story lines in Breach Zone is impressive. The series initially felt somewhat episodic, especially after the introduction of Bookbinder in the second book, but in hindsight it’s clear that Cole was building up all these stories from the beginning. Breach Zone is the culmination of all that set-up, and the payoff is more than worth it. This is the best book in what turned out to be an excellent, unique trilogy. I can’t wait to see what Myke Cole comes up with in the future.

This review was originally published at Tor.com on January 24th, 2014.

This entry was posted in Fantasy, Reviews and tagged Ace, Myke Cole. Bookmark the permalink.