A Natural History Of Dragons by Marie Brennan

Posted on February 6, 2014 by Stefan (Far Beyond Reality) 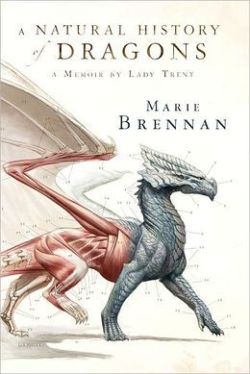 Marie Brennan’s A Natural History of Dragons is presented as the (fictional) memoir of Isabella, Lady Trent, who is the world’s preeminent authority on dragons. In these pages, Lady Trent looks back on her early life and career from the vantage point of the experience and maturity she has gained over the years.

Isabella’s family expects her to pursue the life and hobbies of a typical girl in Scirland’s landed gentry—sketching, maybe the piano, definitely a well-to-do husband from an appropriate family. Instead she finds herself drawn to such unladylike hobbies as building a collection of the tiny insect-like dragons known as scarlings.

The self-professed “ink-nosed” girl (love that term) doesn’t read romances and adventures, instead raiding her father’s private library for books about natural history. Filled with an indomitable curiosity about all things scientific (but dragons in particular), she wants to lead “the intellectual life of a gentleman” in a time when women are expected to stick to their households, child-rearing and idle gossip.

What struck me most about A Natural History of Dragons is the impeccable execution of Marie Brennan’s concept. Isabella is a Jane Austen-era character who is constrained by the expectations of her time but fights her way out of them by the sheer strength of her personality. As a character, she is enjoyable to read and easy to sympathize with, but to be fair, not exactly original, despite what her husband calls her “deranged practicality.” Consequently, the novel’s direction is often not hard to predict, and the pacing is uneven, with some sections that are unfortunately just plain slow.

However, Brennan is so spot-on in the way she creates Isabella’s voice that I couldn’t help but enjoy A Natural History of Dragons. The prose is tuned perfectly to the sense and sensibility (see what I did there?) of a Regency-era novel of manners. The characters and plot developments and dialogues are pitch-perfect. I can’t tell you how much I admire an author who sets out to write a novel that so evidently mirrors a real world historical genre and actually gets it right—warts and all.

One of the novel’s most interesting and surprising aspects is its setting. Before reading, I somehow assumed this was an alt-history world in which place names are different and dragons exist but things are otherwise mostly like our own early 18th Century. The way Brennan emulates the literary forms of that period reinforced this. I sort of assumed “Scirland equals England” and that was that. However, it gradually becomes more and more clear that there’s much more going on: the novel is really set in a secondary world with its own history and mythology and… well, you’ll see.

Another gorgeous touch: A Natural History of Dragons features several interior illustrations by Todd Lockwood. These are, just like the novel, impeccably executed as period-appropriate pieces, from a formal portrait of one of the characters to several of Isabella’s scientific sketches. Tor’s art department really knocked it out of the park with this one.

Also nifty: early on, Lady Trent mentions a possible conflict with her editor. She expects him to complain about a passage she’s writing, but plans to “make him leave it in.” She makes it clear that she’s writing “in her own words” for the first time. She even derisively mentions some of her own earlier works as romanticized travel writing. This meta-fictional playfulness makes her feel something like a reverse (and thankfully much less verbose) Paarfi of Roundwood. This is a Good Thing, in my book.

A Natural History of Dragons is simply delightful—not a term I apply to literature very often, but the novel is just so well-executed and clever that I always had fun reading it, even during several stretches where I wanted the plot to move along at a more sprightly pace. I’m not sure why I lost track of Marie Brennan after reading her debut Midnight Never Come several years ago, but I’m glad I picked up the thread again. I look forward to The Tropic of Serpents, the second part of Lady Trent’s memoirs, due out in March from Tor.

This entry was posted in Fantasy, Reviews and tagged Marie Brennan, Tor. Bookmark the permalink.

7 Responses to A Natural History Of Dragons by Marie Brennan