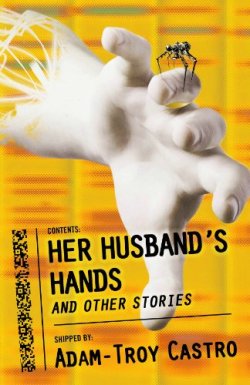 I’m currently working on my review of Her Husband’s Hands and Other Stories, the new short story collection by Adam-Troy Castro. While re-reading the title story and trying to formulate my thoughts about it in one or two short paragraphs, I remembered that I’d already written a long review/analysis of the story, about two years ago now, as a guest post for the excellent Speculative Scotsman blog. I’m re-posting that article here, as a warm-up for my upcoming Tor.com review of the entire collection and, possibly, as a launching point for a series of full-length reviews/discussions/analyses of individual short stories I’ve been vaguely planning for a while now.

Important note: you can read the entire story for free here at the excellent Lightspeed Magazine. I strongly recommend doing this before reading the rest of this post, because, well, going about it the other way around will significantly reduce your enjoyment of both.

One thing that struck me early on about this story is that there’s initially a huge amount of dissonance between the science fiction component and the emotional tone. I’m afraid this dissonance may cause some readers to dismiss the story, which would be a huge shame. There’s a bit of an adjustment required on the part of the reader, early on during “Her Husband’s Hands,” but once you’ve made that adjustment, you can expect one of the most emotionally gripping stories you’ll read all year.

The science fiction component of the story initially seems to border on the absurd: any part of the body can be revived and loaded with the most recent backup of the owner’s personality and memories. It’s more or less exactly the negative of an amputation: instead of a soldier returning home without a limb, the limb returns home without the soldier. Sometimes this results in a person coming home as “just enough meat to qualify as alive.” The situation these survivors and their families find themselves in is so horrifying that “it was impossible to know whether to scream in horror at their predicament or giggle uncontrollably at its madness.”

And so it happens with the story’s main character, Rebecca, whose husband’s hands are solemnly returned home to her, delivered by two serious soldiers. They arrive in a pretty box with an American flag draped over it, a grim parody of an American military funeral that becomes acutely meaningful later on. She’s told she’s lucky: it could have been just a random chunk of flesh in a box, not two perfectly preserved and functional hands. Still, there she is, sitting across the table from her husband, who has been reduced to two faceless extremities.

The strength of the story lies in the way Castro swings from absurdism to genuinely painful emotion in no time. He explores the complexity of Rebecca’s pain in unflinching detail: her husband is technically still alive, but all that remains of the man she loved are these faceless hands. She can’t help but feel revulsion for the sentient body parts. When he asks her to kiss them, she does so out of a sense of obligation. When he moves over to touch her, it’s described as “crab-crawling over,” like one of those scenes in zombie movies where mindless body parts keep moving. She longs for the man who could “arouse her passions as well as her pity,” and most painfully for her (and for the reader), she feels guilty as she does so.

Rebecca can’t help but feel like a war widow. There’s not enough left for her to relate to. She feels like her husband is gone. That’s why the delivery scene, with the flag draped over the box, is so poignant: Bob is not a person to her anymore. It feels as if he’s dead. As if he should be dead. Before long, Rebecca feels trapped. She has to care for her husband. She can’t leave. She realizes the rest of her life is going to be spent in service to the remnants of the man she loved and the remnants of her marriage. She’s uncomfortable sitting across from him during lunch, and by dinner time she realizes that “the silence of their meals would soon be a familiar ritual, for as long as the future still stretched.”

The other side of the coin is of course Bob, her husband, whose body has been almost completely destroyed. The story doesn’t touch as much on his feelings towards his wife, because it’s told from Rebecca’s perspective, but it does deal with the issue of Post-Traumatic Stress Disorder or PTSD. In this future, the possibility of backing up your personality and memories also means that, after death or injury, the revived victim can decide how much he or she wants to remember. Bob initially claims that he’s had most memories of the horrors of war erased (so he can live “blessedly free of some experiences that would have crippled him even more than his current condition”), but eventually it becomes clear that this is untrue and that he remembers everything. The first hint of this comes when he tries to strangle Rebecca in her sleep during a nightmare, which leads directly to the support group, one of the most memorable scenes in the story.

The support group is another part of the story where the absurd and the poignant walk hand in hand, creating some extremely uncomfortable reading. The other people in the group are all mirrors for Rebecca. One person has been so fragmented that she has to be carried around in a suitcase. One couple is in a situation that’s almost identical to Bob and Rebecca’s, except that the woman has had her hands amputated so her husband’s surviving body parts could be grafted onto her own body. Rebecca wonders if her own husband expects something similar and if she could ever bring herself to do it, which is the most overt example of the struggle between guilt and self-sacrifice that she’s going through: how much of her life is she supposed to give up to accommodate what happened to her husband?

The most meaningful scene at the support group comes when a woman who is almost entirely intact – only her face has been replaced by the reflective silver interface – gives Rebecca a hug and says “You’re not alone.” She is literally a mirror: Rebecca sees herself, faceless. All of her identity is being removed now her life has been completely taken over by the return of her husband’s hands. Her reaction sums up the darkness at the core of this story perfectly: “She wanted to tell the other woman, of course I’m alone, and my husband’s alone, and you’re alone, and we’re all alone; the very point of being in hell is that there’s a gulf between us and all our efforts to bridge it for even a moment give us nothing but a respite and the illusion of comfort before those bridges retract and we’re left to face the same problems from our own separate islands. She wanted to say it, but of course she couldn’t, not if it meant embracing despair in defiance of this sectioned woman’s kindness, and so she wept herself blind and took the hug as the gift it was meant to be.”

And then, at the very end, the story suddenly ends on a hopeful note, when Bob comes clean and admits that he didn’t have all his memories expunged, because “the only thing worth remembering about any of it was how much of it i spent wanting to return to you.” The couple finally find common ground, despite everything that’s happened. It’s a surprisingly gentle and tender ending to this story.

Amputees sometimes refer to “phantom pain,” a strange neurological phenomenon that can cause them to have feelings in a limb that’s no longer there. In “Her Husband’s Hands” that phantom pain seems to happen to the spouse, whose husband is almost completely gone, leaving a gaping hole in her life that she is struggling to cope with. It shows in painful, direct language the unspoken feelings of helplessness and guilt that may be experienced by some military families. It’s an incredibly poignant story that’s firmly in the realm of science fiction but still deals with issues that are relevant today.