Posted on February 7, 2013 by Stefan (Far Beyond Reality) 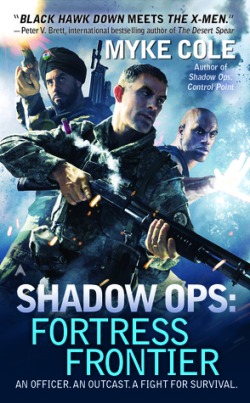 With last year’s Shadow Ops: Control Point, Myke Cole burst onto the scene with a bang, launching a cool, action-packed new series that combines elements of military fantasy and superhero fiction in a contemporary setting. The novel introduces a world in which random people suddenly find themselves with magical powers, able to control the elements, create portals to another realm, even raise the dead. The U.S. military has taken control of these powerful new abilities because, as they say, “magic is the new nuke.” People who discover they are “Latent” must report themselves or face persecution as “Selfers.” On that first novel’s cover, Peter V. Brett called it “Black Hawk Down meets the X-Men,” and that’s still the best summation of this series I’ve seen so far. (The publisher seems to agree, as that quote is in the same prominent spot on the new book’s cover.)

Now, about a year later, Myke Cole delivers Shadow Ops: Fortress Frontier, the eagerly awaited sequel to that spectacular debut. (You can find an excerpt and the rather awesome book trailer here, and a review of the first novel here.) Quick summary for people who haven’t read Control Point yet: this new installment is just as good as the first one, so if you were waiting to see if Cole manages to avoid the dreaded sophomore slump, rest assured and jump right in. For more info, including some vague plot details from the first novel, read on.

Initially, the biggest surprise of Shadow Ops: Fortress Frontier is that it starts off with a brand new protagonist. At the end of Control Point, I fully expected the next novel to pick up where the first one left off, following the adventures of Oscar Britton. Instead, Fortress Frontier starts the story of Colonel Alan Bookbinder, who—at least initially—feels like a very different character.

After all, Bookbinder is a middle-aged administrator whose domain consists of ledgers and spreadsheets, not battlefields. Myke Cole makes it abundantly clear early on that Bookbinder is a bureaucrat without any combat experience and that, despite his high rank, Bookbinder feels uncomfortable, surrounded by all the highly decorated super-soldiers in the Pentagon. At one point he ruefully describes himself as having “the leadership capability of a wet sock.” The contrast with Control Point’s Britton couldn’t be more clear.

But then, before you’re even out of the first chapter, Bookbinder suddenly finds himself in the same boat as Britton: he’s Latent. Even though in some ways they’re as different as can be while still in the military, Bookbinder’s initial trajectory is remarkably similar to Britton’s. Life as he knows it is over. His comfortable career is in jeopardy. He must learn to cope with the gift/curse of his unworldly new magic and everything it entails.

It’s fortunate that Bookbinder is such a vastly different person from Britton, because that’s the main reason why the first section of Fortress Frontier isn’t a carbon copy of Control Point. His age, rank, lack of combat experience, and more cautious and reserved personality turn this into a very different story. Bookbinder is a more mature character, and in some ways more complex than Britton.

It’s good (and promising) to see that Myke Cole is able to write convincingly from this point of view. It’s especially great that, thanks to this, the series is now much more than just a story centered on one conflicted action hero. By switching to Bookbinder, Cole has made it clear that, as solid and interesting as his characters may be, the series’ world-building and larger story arc are just as important. There are mysteries to unveil, and to do so, Cole will shift perspectives and protagonists rather than take the easier route of keeping one hero front and center for his readers to identify with.

Second surprise: it quickly becomes clear that, in terms of chronology,Fortress Frontier partially overlaps with Control Point. Early on you’ll actually witness some of the events of the first novel again, but this time shown from Bookbinder’s perspective. Those first few chapters mostly serve to introduce Bookbinder and a few other new characters, rather than advance the larger plot of the series. It’s only after this that Cole starts to cover the fallout from the dramatic events shown at the end of Control Pointand move the story forward.

As for where he takes the story… Well, I don’t want to spoil it for you, but rest assured that you’ll get the same mix of intense personal conflict and explosive, fast-paced action as found in Control Point. There are some truly surprising twists and turns. You’ll get to see much more of the world of the Source. You’ll get a more complete idea of how the Great Awakening has affected the rest of our world. You’ll get a realistic depiction of the burdens of commanding a group of soldiers in combat, making hard decisions and second-guessing them under the worst of circumstances. You’ll return to Britton’s point of view, and later on, in yet another twist, a surprising third character from the first novel takes center stage. Fortress Frontier is a fast-paced page turner just like Control Point, at once recognizable and full of surprises.

The one aspect of this series that bothers me is that it’s very much a man’s man’s world. There are very few positive, strong female characters. Oddly, Cole introduces the first two women to appear in Fortress Frontier by singling out their weight issues right from the start: Bookbinder’s wife Julie (“her slim body gone to the padded comfort of middle age but still beautiful”), and his administrative assistant Sergeant Pinchot (who “looked like she’d been stuffed into her immaculate uniform” and needs a body-weight waiver). Otherwise, these two barely have speaking parts. The next female character to appear is another secretary, who is sent to fetch coffee for the officers after saying all of two lines. Carried over from Control Point are the impressionable and naive Downer and purely evil Scylla. Sure, there are a few exceptions (e.g. the quietly competent Major Woon in Fortress Frontier), but for the most part, this book is so full of testosterone that it may turn off some readers.

Still, putting Control Point and Fortress Frontier side by side, it’s clear to see that Myke Cole has improved considerably as a writer. He’s carried over the strengths from his debut: smooth, fast-paced plotting, spectacular action scenes, and characters who experience internal struggles and personal growth under the most strenuous circumstances. He takes the series to the next level by introducing a brand new and very different protagonist while continuing to unpeel the layers of his setting and advance the story. Fortress Frontier is a better book than Control Point in almost every way. If you enjoyed Myke Cole’s debut, you should love this sequel.

This review was originally published at Tor.com on January 28th, 2013.

Note: I invited Myke Cole to respond to my review, specifically the section dealing with the way women are portrayed in his novels. The author declined.

This entry was posted in Fantasy, Reviews and tagged Ace, Myke Cole. Bookmark the permalink.