The Galaxy Game by Karen Lord

The Galaxy Game is Barbadian author Karen Lord’s third novel, following the critically acclaimed and award-winning Redemption in Indigo, and last year’s well-received The Best of All Possible Worlds.

On the verge of adulthood, Rafi attends the Lyceum, a school for the psionically gifted. Rafi possesses mental abilities that might benefit people . . . or control them. Some wish to help Rafi wield his powers responsibly; others see him as a threat to be contained. Rafi’s only freedom at the Lyceum is Wallrunning: a game of speed and agility played on vast vertical surfaces riddled with variable gravity fields.

Serendipity and Ntenman are also students at the Lyceum, but unlike Rafi they come from communities where such abilities are valued. Serendipity finds the Lyceum as much a prison as a school, and she yearns for a meaningful life beyond its gates. Ntenman, with his quick tongue, quicker mind, and a willingness to bend if not break the rules, has no problem fitting in. But he too has his reasons for wanting to escape.

Now the three friends are about to experience a moment of violent change as seething tensions between rival star-faring civilizations come to a head. For Serendipity, it will challenge her ideas of community and self. For Ntenman, it will open new opportunities and new dangers. And for Rafi, given a chance to train with some of the best Wallrunners in the galaxy, it will lead to the discovery that there is more to Wallrunning than he ever suspected . . . and more to himself than he ever dreamed.

Onward to the review!

Something I want to get out of the way right from the start: while it’s not stated anywhere on the book’s cover, The Galaxy Game is the sequel to The Best of All Possible Worlds. I very much wish this had been made more clear from the onset, not for me (as I’ve read Worlds) but for any unsuspecting readers who haven’t. The book takes place in the same fictional universe, a few years after the conclusion of the first novel. More significantly, several major and minor characters return in roles of various levels of importance. Usually there’s no or very little explanation about their backgrounds, which leaves a lot of information in the dark for new readers.

I took a break early on in The Galaxy Game to reread The Best of All Possible Worlds before tackling the rest of the book, and I’m glad I took the time to refresh memory. The novel’s Inscrutable Prologue becomes a lot more, um, scrutable if you know/remember the details about Rafi, the nephew of the first novel’s main character who played a minor role in Worlds but takes front-and-center in Galaxy. Likewise, the setup of the universe with its several human races, each with its own special ability (telepathy, empathy, etc.) gets a very quick infodump-y introduction here that may confuse first time readers but will make a lot more sense to people who already know their Sadiri from their Ntshune, Zhinuvians, and Terrans. 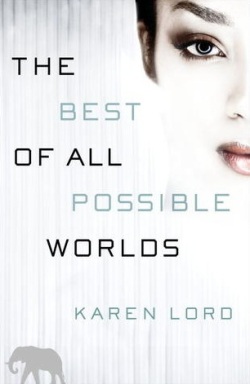 To be clear: I think it’s possible to make sense of The Galaxy Game on its own, but there’s going to be a ton of stuff, mostly involving characters from Worlds, that will either not have the impact it should have or will just not make sense at all. And all of this could have easily been fixed by sticking a “The Sequel To… “ on the cover.

With that out of the way, on to the actual novel. The Galaxy Game is a worthy, if rather different, sequel to The Best of All Possible Worlds. Where Worlds started off with a planet-shattering event that had repercussions throughout the universe (and still does, in the sequel), The Galaxy Game takes the opposite route, starting with a life-changing event on a more personal scale: Rafi’s escape from a “school for gifted children” that seeks to limit his empathic abilities. With the help of his crafty friend Ntenman, he makes it to Punartam and gets involved with Wallrunning, a gravity-defying sport that places great value on Rafi’s ability.

Wallrunning is one of the two most interesting facets of this novel. Introduced as a sport, it gradually becomes clear that it used to be a lot more meaningful, with older practitioners who monitor the young’uns and occasionally hint at its history-changing origins. I simply love this kind of thing: a vital skill that’s morphed, over the years, into something merely used for entertainment. (Melissa Scott did something similar in one of her novels, but I can’t remember which one.)

The second item I really loved about this novel is Punartam, a matriarchal culture that’s formalized social credit to the point where it’s just as important as the standard, you know, financial credit you might need for food and shelter. There are towering structures called Academes that, tall as they are, hide deep warrens of underground activity, each the home of a social grouping bound by ties of family and loyalty and several other social factors that are completely bewildering to poor Rafi as he first arrives. Most of the middle section of the novel is set on Punartam, and I’d happily have read a lot more of it.

Another major difference between Worlds and Galaxy is its structure. Many reviewers (including me) commented on the episodic nature of the first novel, and not always positively. The Galaxy Game abandons that episodic structure: while Rafi still visits several locations throughout the book, it’s done in a much more organic way. It feels like one story, rather than the “and now we’re going to visit this settlement, and then we’re going to this one” feel of the first book.

The reader also gets a much better look at the broader universe Karen Lord has constructed for these books. The Best of All Possible Worlds took place in the shadow of the Sadiri genocide, but many of the big repercussions for the other cultures were kept off camera to focus on the travels of Delarua, Dllenakh and co. in their search for Sadiri-compatible cultures on Cygnus Beta. In The Galaxy Game, a few years have passed, and Rafi’s progression through his journey gives the reader a much better idea of the relative positions of the various cultures and the changed (and changing) power balance.

In the end, I’m not sure if I’d give The Galaxy Game as high a rating as The Best of All Possible Worlds, even though it’s strangely hard for me to identify why. This is another intelligent science fiction story set in an increasingly detailed fictional universe and full of nifty concepts to tickle your brain. (I haven’t even mentioned what we learn about traveling by mindship!) On the other hand, I missed Delarua’s bubbly personality and chatty narrative style. Rafi, by contrast, is considerably more dry and, of necessity given his lack of experience in the broader universe, a bit timid and naive at times. The occasional switches of perspective to his more experienced and audacious friend Ntenman provide some welcome relief there, as do the sections focusing on Serendipity (who’s my personal bet to take the main character role if there’s another novel in this series.)

Rereading The Best of All Possible Worlds, I bumped it up to a higher rating on my personal scale because it became clear that there was a lot more going on below the surface than I caught on a first reading. It’s possible the same will happen if/when I reread The Galaxy Game, but for now I’d file it under “good” rather than “great”: a novel that offers a nifty fictional universe and a great amount of fascinating concepts, but doesn’t always hold together as well when it comes to plot, pacing, and character development. It feels, much like Worlds, like a novel that could have used another hundred pages to further develop some concepts and give some more breathing space to a few scenes that feel rushed.

So that’s a cautious recommendation with a caveat: if you read and loved The Best of All Possible Worlds, read The Galaxy Game. If you weren’t crazy about Worlds, it really depends on what you liked and didn’t like about it, because The Galaxy Game improves on some aspects and moves backwards on others. And if you haven’t read Worlds yet, definitely pick it up first, before The Galaxy Game.

– my review of The Best of All Possible Worlds

– the author’s Tumblr (which I kept misreading as Drakenlord)

4 Responses to The Galaxy Game by Karen Lord