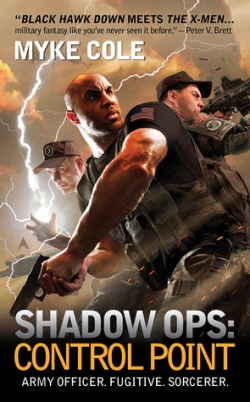 “Magic is the new nuke.” That’s how one member of the military describes the biggest change to our reality yet: overnight, random people are waking up with powerful magical abilities. Some can control water or fire. Some are necromancers. Some can heal people or create magical gates to other places.

The powers controlled by these “Latent” individuals have such immense potential, both for good and evil, that the U.S. government is practically forced to co-opt them. After the McGauer-Linden Act is passed, people who “Manifest” magical powers have to turn themselves in. No exceptions. “Selfers” who practice unlawful magic are hunted down mercilessly and disappear from view.

Army officer Oscar Britton is attached to the military’s Supernatural Operations Command and helps hunt down Selfers, but when he suddenly Manifests a rare and forbidden form of magic, the hunter becomes the hunted…

Shadow Ops: Control Point by Myke Cole is the biggest surprise of the year for me so far. If you want just a basic summary, then Peter V. Brett’s cover blurb of “Black Hawk Down meets The X-Men” is as perfect a way to sum up this novel as you can hope for. It’s contemporary fantasy, it’s military fantasy, it’s got something very similar to superheroes, but not quite. There’s politics and lots of action and even a dash of romance. There are solid characters with more moral complexity than you might expect to find in a novel with this type of cover, and there’s a plot that grips you from the start and then doesn’t let go until the end. There’s so much to cheer about here that it’s hard to decide where to start.

Control Point’s protagonist Oscar Britton is an interesting and complex character. Although a psychologist would probably have a field day drawing parallels between Oscar’s career and his relationship with his father, Oscar is first and foremost in the military because he believes in serving his country and doing the right thing. Those convictions are tested right from the start, when he is forced to hunt down a couple of teenagers who have Manifested magical skills and refuse to turn themselves in. Is it okay to gun down kids if they pose a danger to their surroundings? How about if they had no choice about the skills they suddenly woke up with? How about if they’re maybe just scared and confused, and that situation’s not improved at all by having the armed forces drop down on them in force?

Right when the opening scene is through making you ask those complex questions, Oscar himself unexpectedly finds himself in the position those kids were in. He runs, and he keeps running until, finally, he’s made an offer he can’t refuse. As the plot progresses, those same questions keep coming back in different variations. What should someone who suddenly wakes up with powerful magic do? Where should their loyalties lie? What can reasonably be expected from them by their peers and by their country?

Replace “Latent” with “mutant” and the comparisons to The X-Men are easy to make. Control Point shows several ways a person can handle their skills, from doing well to doing evil and everything in between, even including a Magneto-like belief that those magical skills make you a superior being. It’s the tension between those different attitudes that makes Control Point a great novel, much like it made The X-Men a great comic series. And just like Professor Xavier’s School for Gifted Youngsters, there’s even a magical learning institution of sorts here, except in this one the students wear fatigues and do push-ups if they talk back to their instructors.

Control Point provides a great look into the mind of a soldier: to fulfill your oath and help your country, you may have to hurt or kill other human beings. Those other human beings may have the same skills you have, but simply refuse to relinquish their independence — just like you might want to do, after you realize what’s being asked of you. It’s a complex dynamic, and the way Myke Cole builds it into his novel could only come from someone who has actual experience in the armed forces. This is a rare and precious thing: a military novel that may give people an inkling of understanding of what it’s like to be a soldier. Not just explosions and impressive machinery, but also the ongoing mental struggle: am I doing the right thing? One of the plot lines here (and one I think will continue throughout the series) focuses on a band of Native Americans who are using their magical skills for what can charitably be called asymmetrical warfare in an attempt to try and reclaim their ancestral lands. It’s just one example of the large moral grey area to be found in this novel.

The most surprising thing about Shadow Ops: Control Point is that it’s a debut. Myke Cole has somehow arrived, fully formed, as an author who can write a believable character, a well paced plot, and a whole slew of action scenes that will have you on the edge of your seat. In that sense, it reminded me a bit of Peter F. Hamilton’s Greg Mandel books, another debut series that combined military themes with supernatural abilities and delivered both moral complexity and thrilling action. Not a bad guy to be compared to for a debut author. We may be witnessing the start of a great career here.

One of the recurring lines in Shadow Ops: Control Point is “skill beats will’: if you apply the skills you learned, you can beat opponents who are much stronger than you. Even from his first novel on, Myke Cole shows that he has the skills to write circles around many more experienced novelists. Shadow Ops: Control Point is both entertaining and thought-provoking; just one of those would make it a good novel, but the combination is what it makes it a great one. If you’re in the mood for something that’s action-packed but still delivers depth, this is a great choice. Recommended.

This entry was posted in Fantasy, Reviews and tagged Ace, military, Myke Cole. Bookmark the permalink.